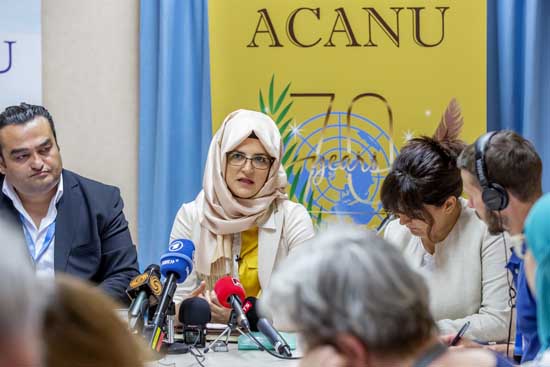 Cengiz, having arrived at Geneva to take part in the 41st session of the UN Human Rights Council (UNHRC), spoke to Anadolu Agency and commented on the recent UN report, silence of the Saudi crown prince and her life after Khashoggi.

Emphasizing that the UN rapporteur’s report shocked the UN Geneva Office and international communities, Cengiz said she thought even Callamard herself might be surprised with the attention the report has drawn.

Callamard’s report had said: “The evidence gathered by the inquiry suggests that the killing of Mr. Khashoggi constituted an extrajudicial killing, an enforced disappearance and possibly an act of torture for which the state of the Kingdom of Saudi Arabia is responsible.”

Her report pointed that the inquiry found credible evidence of high-level Saudi officials’ individual liability, including that of the Saudi Crown Prince Mohammad Bin Salman, whose “silence” on the report was a source of curiousity for Cengiz.

“That he [crown prince] has not made a statement about his name being involved in assassination [case] as suspect indicates that some people possess the evidence suggesting his possible involvement in this incident,” Cengiz alleged. She said Bin Salman‘s silence might be because he is

worried that evidence linking him to the killing might come up if the investigation goes deeper.

“This suggestive silence should be addressed, I think,” she said, stating that it did not make any sense that Bin Salman has been silent despite being mentioned in the UN report. “Why did he not make a single refutation? That’s the question.”

Recalling that Callamard’s report called on the UN to launch an international criminal investigation, she said: “This [call] is for UN Secretary-General Antonio Guterres as it is the highest position that is able to prompt the world [to step into action].”

Furthermore, she urged western countries such as the U.K., Canada and Norway to support the international criminal investigation as the one led by Saudi Arabia “lost its legitimacy” and it would “probably protect perpetrators.”

Not knowing the whereabouts of Khashoggi’s body has been devastating for Cengiz as it makes her think that Khashoggi might still be alive. “This is an emotional trauma,” she said.

“I still wonder what they did with Jamal’s body, where they took it, these questions puzzle me. Horrific things come to my mind such as whether they dissolved the body or they did something else; but, I’m absolutely clueless about the whereabouts of the body,” she lamented.

Khashoggi was killed and dismembered by a group of Saudi operatives shortly after he entered the country’s consulate in Istanbul on Oct. 2 last year.

Riyadh offered various, conflicting narratives to explain his disappearance before acknowledging he was murdered in the diplomatic building while seeking to shift blame for his death on a botched rendition operation being carried out by rogue agents.

Khashoggi‘s body has not been recovered, and the Kingdom has remained silent on its whereabouts.