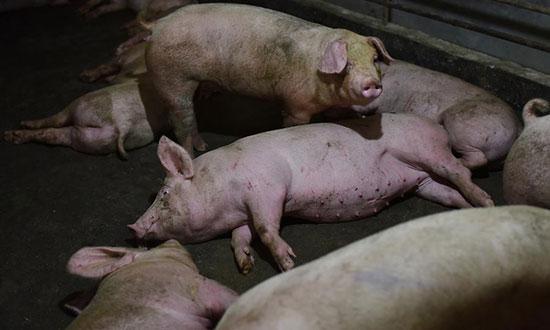 But the sector has largely offset those massive losses by cobbling together new customers in smaller markets from Colombia to Vietnam, according a Reuters analysis of data from the U.S. Meat Export Federation and the U.S. Department of Agriculture (USDA).

As American farmers pin their hopes for a trade deal on Trump and Chinese President Xi Jinping’s agreement to restart talks at last week’s G20 summit, the pork industry stands out for its success in avoiding the sharp sales reductions that have slammed other U.S. farm sectors, such as soybeans and sorghum.

Overall, U.S. pork exports fell 3.9% by volume and 8.4% by value from May 2018 to April 2019, compared to a year earlier, according to data compiled by the U.S. Meat Export Federation. China increased its tariff on U.S. pork in April of last year and again in July, when it imposed tariffs on soybeans.

The boom in small-market sales has “been a savior for the pork industry,” Iowa hog farmer Dean Meyer said.

The industry’s salvation has roots in global marketing efforts that began more than a decade before the U.S-China trade dispute, as American hog farmers and their trade groups sought to take advantage of a boom in protein demand linked rising incomes in emerging markets.

They visited importers and grocery stores in developing countries, taught buyers how U.S. pork is produced and touted its quality to chefs and bloggers around the world, according to participants in the trade trips. Those efforts took years to pay off.

As China and Mexico reduced their purchases last year, a subsequent drop in U.S. pork prices helped encourage alternative buyers to ramp up purchases – particularly from smaller markets that had trade agreements with the United States, such as Colombia and South Korea.

The sector’s ability to avoid a sharper decline in total exports underscores the importance of developing a diversified customer base to guard against any trade disruptions with major importers.

The soy industry had grown so heavily dependent on China – which before the trade war purchased 60% of U.S. soy exports, worth about $12 billion – that its more recent efforts to find new markets couldn’t make up for the business it lost in the trade war. Sorghum, a much smaller crop, is even more dependent on China, which had accounted for 80% of U.S. exports.

By contrast, the U.S. pork industry relied on China and Hong Kong for about 20% of exports by volume in the $6 billion market before the trade war. Hog farmers started to worry years ago about the risk of a decline in demand from China, which previously blocked some U.S. pork over the use of a drug that helps fatten hogs.

Sales to Mexico over the same period dropped 11% by volume and 25% by value, to about 726,859 metric tons and $1.2 billion, after Mexico imposed 20% tariffs on U.S. pork imports in retaliation for U.S. duties on metals imports last year.

Replacement buyers in smaller markets – many of which already had relationships with U.S. meat producers – quickly stepped in to snap up much of the pork industry’s surplus.

U.S. exports to Colombia, the Dominican Republic, Australia, Philippines, Vietnam and South Korea climbed by 24% by volume – to more than 530,000 metric tons – in the 12 months ending in April, compared to a year earlier, according to data from the U.S. Meat Export Federation.

Meyer and other hog farmers like him have trekked across the globe on trade missions seeking new buyers for U.S. pork. He visited Colombia in 2015 and Peru in 2017, efforts that are now showing results, Meyer said.

Exports to South Korea jumped 14% to more than 230,000 metric tons in the 12 months ending in April, boosted by the United States-Korea Free Trade Agreement.

“I think it’s a result of doing these trade missions, hitting these markets hard,” said Meyer, who also serves on the executive committee for the U.S. Meat Export Federation.

This spring, the U.S. Meat Export Federation organized a pork cook-off in Ho Chi Minh City and afterward held an educational session and reception for about 300 chefs.

U.S. farmers on a separate trade trip to Vietnam visited food manufacturer Vissan VSN.HNO last autumn, said Nebraska hog farmer Bill Luckey, who took part in the trip and is a director for the National Pork Board.

As a result, the Vietnamese company sent a delegation to tour U.S. meat processing plants, opening the door for potential deals, he said.

“We are out there trying to look at opportunities around the world,” Luckey said.

While the pork sector has limited its losses, it might make great gains in sales to China were it not for the trade war. An epidemic of a fatal hog disease, African swine fever (ASF), has decimated millions of pigs in China’s domestic herd, increasing its reliance on pork imports.

China is the world’s top hog producer and pork consumer.

“This is a once-in-a-lifetime opportunity in China because of ASF,” said Nick Giordano, vice president and global government affairs counsel for the National Pork Producers Council. “We can’t fully capitalize on it because we have a 50% punitive tariff.”

The U.S. industry did benefit from the epidemic, however. Expectations that the disease will push China to increase pork imports lifted U.S. hog futures LHc1 by 78% from a four-month low in February to a five-year high in May. Prices have since dropped, but the gains allowed some farmers to lock in profits through 2020.