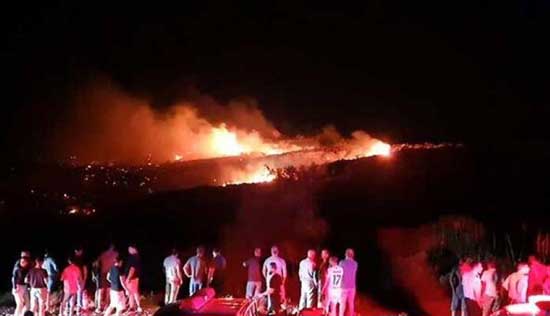 An object that hit Turkish Cyprus and caused a large fire early July 1 appears to have been a Russian-made missile, Turkish Cypriot Foreign Minister Kudret Özersay has said.

Özersay said the air defense systems in Syria against the Israeli attack launched by the S-200 missiles may have bounced on the island.

On July 1, Özersay tweeted that the examination on the object indicated that “signs and statements on the missile crashed last night is the same with the Russian-made S-200missiles that fell into the southern border province of Gaziantep in Turkey on July 2018.”

“It is uncertain, but the initial findings of our authorities indicate that this is an S-200missile,” he said.

Özersay said he had a phone call with Turkey’s Chief of General Staff Yaşar Güler on July 1.

The object had fallen near the village of Tashkent between Nicosia and Kyrenia in northern Cyprus. Immediately thereafter, explosions were heard and flames rose from the area. Footage from the scene show the tail-fins of a missile that crashed in a forest area. No one was injured.

The incident happened as Syria said Israeli jets attacked several military sites near the capital Damascus and the central city of Homs early July 1, killing four civilians, including an infant, and that Syrian air defenses had intercepted several of them.

The Syrian Observatory for Human Rights, a Britain-based war monitor, said Israel launched strikes both from the air and sea, targeting Iranian-linked bases near Homs and at least 10 targets near Damascus, including a base where Iran’s Islamic Revolutionary Guard Corps forces are headquartered and a weapons research center.