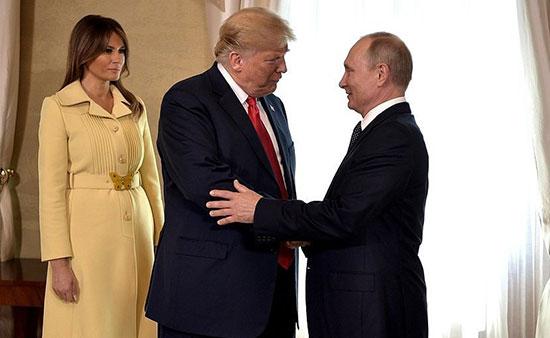 Certain that Western and liberal democratic leaders would limit themselves to verbal denials, Russian president Vladimir Putin knew he was kicking into an open goal when he declared on the eve of the Group of 20 (G20) summit in Osaka that liberalism had “outlived its purpose.”

He may even have anticipated that US president Donald J. Trump would go further and in his own way endorse the Russian president’s assertion.

When asked at a news conference to respond to Mr. Putin’s remarks, Mr. Trump opted to denounce America’s liberals by focusing on American municipal leaders who oppose his policies, including his clampdown on migration.

Mr. Putin “sees what’s going on. If you look at what’s happening in Los Angeles…and San Francisco and a couple of other cities which are run by an extraordinary group of liberal people, I don’t know what they are thinking, but he does see things that are happening in the United States that would probably preclude him from saying how wonderful it is. I’m very embarrassed by what I see,” Mr. Trump said.

In a nod to illiberal governance, Mr. Trump went on to say that “you don’t want it to spread and at a certain point, I think the federal government may have to get involved. We can’t let that continue to happen.”

Mr. Trump’s response was not a one-off remark. His empathy with illiberalism was also evident in his refusal to seriously take Mr. Putin to task for alleged Russian interference in US elections despite the conclusion by US intelligence and special counsel Robert Mueller that there had been extensive meddling.

Similarly, during a breakfast meeting at the G-20 with crown prince Mohammed bin Salman, Mr. Trump praised the Saudi leader for doing a “spectacular job.”

He praised Prince Mohammed as “a man who has really done things in the last five years in terms of opening up Saudi Arabia” and described the prince’s enhancement of some women’s rights as a “a revolution in a very positive way.”

Mr. Trump made no mention of the fact that Prince Mohammed had imprisoned activists who had campaigned for things like the lifting of a ban on women’s driving as well as scores of critics and dissidents.

The activists, some of whom have asserted that they have been tortured, are standing trial on charges of undertaking “coordinated and organized activities… that aim to undermine the Kingdom’s security, stability, and national unity.”

Like virtually all Western and liberal democratic leaders at the G20, Mr. Trump played down Saudi Arabia’s lack of transparent accountability for last October’s killing of journalist Jamal Khashoggi as well as the conduct of the Saudi-United Arab Emirates-led war in Yemen.

The leaders made sure that Prince Mohammed, the host of next year’s G20, was not isolated as he was at their gathering last year in Buenos Aires.

A senior official tempered outgoing British prime minister Teresa May’s call for accountability in a one-on-one with Prince Mohammed by noting that the two leaders had “concluded by agreeing on the importance of the relationship” and of “regional stability” with no apparent qualification.

Perhaps because the targeting in 2018 of two Russians with a nerve agent occurred on British soil, Ms. May took a tougher stand than most in a frosty meeting with Mr. Putin.

“The prime minister underlined that we remain open to a different relationship, but for that to happen the Russian government must choose a different path. The prime minister said the UK would continue to unequivocally defend liberal democracy and protect the human rights and equality of all groups, including LGBT people,” a spokesperson for Ms. May said.

By and large, however, Western and liberal democratic leaders seemed to lend credibility to Mr. Putin’s assertion on liberalism by failing to put their money where their mouth is.

They were equally soft gloved in their interactions with Chinese president Xi Jinping when it came to liberal values such as human rights.

There was no apparent mention, at least no public mention, of China’s brutal clampdown on Turkic Muslims in the troubled north-western province of Xinjiang.

The incarceration in re-education camps of an estimated one million Uyghurs amounts to the most frontal assault on a faith group since World War Two’s Nazi assault on Jews.

Likewise, there was overall little that went beyond strong verbiage in the response by liberal democratic leaders to Mr. Putin’s attempt to fuel polarisation in the West by asserting that liberalism “presupposes that…migrants can kill, plunder and rape with impunity because their rights… have to be protected.”

As a result, European Council president Donald Tusk’s retort put little, if any meat, on the response of liberal democratic leaders and seemed more like paying sharp-tongued lip service to values such as human rights

“For us in Europe, these are and will remain essential and vibrant values. What I find really obsolete are authoritarianism, personality cults, the rule of oligarchs. Even if sometimes they may seem effective,” Mr. Tusk said.