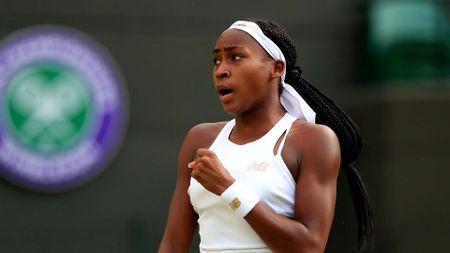 The qualifier only secured her place in the main draw on Friday – which meant this was her very first game in a grand slam event, which she remarkably won 6-4 6-4.

39-year-old Williams, a full 24 years older than her opponent, had no answer for the teenager’s power and energy, while she also showed poise way beyond her years and experience when closing out the match on serve.

Gauff is the youngest player to ever feature in the main draw at Wimbledon in the open era, but she looked right at home and is already being tipped as a future winner of the event.

Gauff served superbly, being broken only once, and showed tremendous composure in her first main draw match at a grand slam, making just eight unforced errors compared to 25 for her opponent.

Gauff was inspired to pick up a racket by the Williams sisters and for Venus it must have been like facing a teenage version of herself as her opponent fired down serves over 110mph and scampered around the court with her long levers.

Gauff is already a terrific athlete and Williams was simply unable to hit through her. What was most impressive, though, was the way she constructed points, playing close to the lines but rarely too close and using angles to open up the court.

A tense final game saw Williams save three match points before creating one break point, which Gauff saved with a 108mph second serve. When her fourth opportunity came, the teenager took it, then dropped to the court in disbelief.

Speaking on BBC Two, Gauff said: “It’s the first time I have ever cried after winning a match, I don’t know how to explain how I feel.

“I definitely had to tell myself to stay calm, I had to remind myself that the lines are the same lines, the courts are the same size and after every point I told myself ‘stay calm’.”

The two shared a few words at the net, with Gauff recounting: “She told me congratulations and keep going, she said good luck and I told her thanks for everything she did.

“I wouldn’t be here if it wasn’t for her – I told her she was so inspiring and I’ve always wanted to tell her that but I’ve never had the guts to before.”

Second seed Naomi Osaka suffered a shock first round exit at Wimbledon as Yulia Putintseva claimed a second straight victory over her.

Osaka’s last match before arriving at the All England Club was a straight-sets loss to Putintseva at the Nature Valley Classic in Birmingham and again the Kazakh proved too consistent.

Osaka led by an early break but could not hold onto her advantage and Putintseva celebrated a 7-6 (4) 6-2 victory and one of the biggest successes of her career.

Osaka quickly moved into a 3-1 lead but Putintseva is known as one of the best competitors on tour and, after she fought back to level at 3-3, things became increasingly complicated for Osaka.

The Japanese player was the one applying most of the pressure but she could not break and a wild end to the tie-break left her a set down.

Osaka continued to hit eye-catching winners, particularly off her backhand, but too often Putintseva retrieved one ball more than her opponent was expecting.

When Osaka dumped a final backhand into the net for a 37th unforced error, Putintseva pumped her fist and then looked around Centre Court in disbelief.

Third seed Karolina Pliskova had to save three set points in the second against China’s Zhu Lin before coming through 6-2 7-6 (4).

Pliskova is among the big favourites to win the title and arrived at the All England Club having blitzed the field to lift the trophy at Eastbourne on Saturday.

But she was not at her best against Zhu, who has never won a grand-slam match, and the Chinese player held set point three times serving at 6-5. Pliskova managed to break, though, and came out on top in the tie-break.

The Czech, who has only once made it past the second round here, said: “It’s tough to compare with the week in Eastbourne. I think it was quite normal. Of course, it went a little bit longer, and I almost dropped a set. It’s still almost. I played two sets, that’s fine.

“I think my timing was a little bit off today. I just didn’t have any chance to hit on the match courts, which I felt were totally different than Aorangi (practice) courts.”

Seventh seed Simona Halep was given a tough battle by Belarusian Aliaksandra Sasnovich before battling to a 6-4 7-5 victory.

Halep, who has made the quarter-finals twice and the semi-finals once, trailed 5-2 in the second set and had to save a set point at 5-4 before sealing victory with a run of five games in a row.

Halep suffered a nasty-looking slip during the first set and called for the trainer prior to the start of the second.

The Romanian said: “It’s OK in this moment. But I need to do the treatment. I feel it a little bit. I think it’s a little bit stretched, the muscle behind the knee, and also the Achilles. Hopefully it’s nothing dangerous and I can recover until the next match.”