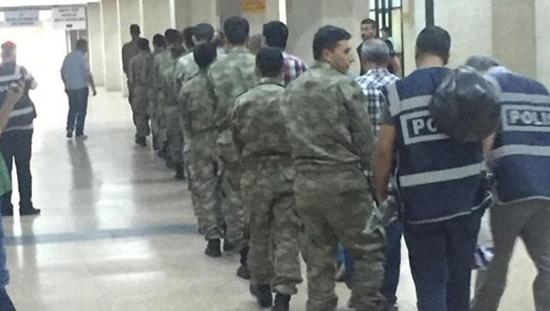 Turkey accuses the movement of orchestrating a 2016 coup attempt, although it strongly denies any involvement.

Since then over half a million people have been prosecuted for alleged membership in the Gülen movement.

The İzmir Chief Public Prosecutor’s Office issued detention warrants for 28 members of the Turkish military and 14 civilians over Gülen links.

Police raided houses in 18 provinces on Tuesday morning and detained at least 26 of the suspects, according to the state-run Anadolu news agency.

The suspects are accused of infiltrating the Turkish Armed Forces on behalf of the Gülen network.

In another investigation into the army, the Konya Chief Public Prosecutor’s Office on Tuesday ordered the detention of 40 suspects, including active duty military.

At least 15 of the suspects were taken into custody in police operations across 25 provinces.

The suspects are accused of secretly communicating with each other by payphone between 2012 and 2016, according to Anadolu.

The suspects are accused of using ByLock, a smartphone application that Turkish authorities believe was used among Gülen followers.

At least 22 of the suspects have been detained so far.

In Ankara former Supreme Court of Appeals judge Mehmet Arı was sentenced to 13 years, nine months in prison on charges of Gülen links.