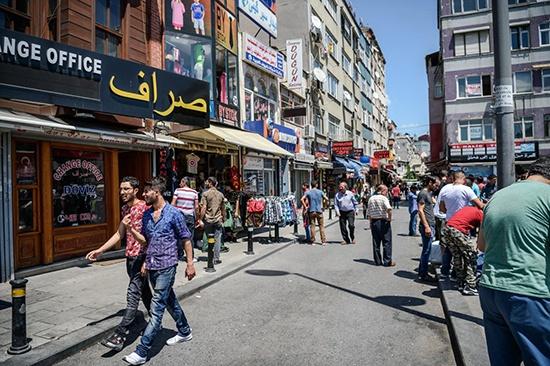 The relationship with refugees and host communities in Turkey’s biggest city is souring, with Istanbul’s mayor accused of fanning the flames.

A Pandora’s box appears to have been opened in Istanbul after an anti-Syrian riot broke out on Saturday with rumours spreading that a Syrian refugee boy had verbally abused a 12-year-old local girl.

An angry crowd gathered in the Kucukcekme district of the city comprised mainly of young men, who gathered around the area’s Asik Veysel street, attacking shops with Arabic signboards.

On Sunday evening, a similar scenario was under way in the same place, with police again having to intervene to disperse the crowd.

On a visit to the area on Monday morning, nothing seemed extraordinary except a noticeable police presence.

But when Middle East Eye came to the stores owned by Syrian refugees, there were shattered window glasses, broken signboards and nervous, watching eyes.

‘I saw stones and I believe I saw guns too’

“When we heard the shouting we closed the shutters,” said the owner, who declined to speak by stating: “I am sorry brother. I really do not want to get into any trouble.”

Halid al-Hamed, another restaurant manager, said: “We were working as usual. But on Saturday night, after 10.30pm, about 70 people attacked my place.

“Everything happened so quickly. I saw stones and I believe I saw guns too. I closed the shutters after two of my customers got slightly hurt.”

Hamed, a 34-year-old originally from Aleppo, said: “Just a rumour caused all of this mayhem. We were not expecting such serious things.

“Maybe somebody did something wrong, but we did nothing wrong. A hand has five fingers and none of them are the same. As such, not all the Syrians are same.

‘Maybe somebody did something wrong, but we did nothing wrong. A hand has five fingers and none of them are the same. As so, not all the Syrians are same’

“My restaurant has been closed since Saturday. Today, I’ll clean the mess up and open the place again tomorrow. I am not going anywhere but I am truly upset.”

Another business owner from Aleppo, who preferred to remain anonymous, said: “From what I heard they attacked my market after 1.30am. I am not leaving my market because I have no other choice.

“But I will be more cautious. I was always closing my shop around midnight to 1am. But from now on, I’ll close the place at 9.30pm.”

The owner said he was not afraid of his neighbours, but he was not sure about the ones who came from other neighbourhoods.

According to residents, 15 to 25 percent of the population of the neighbourhood is Syrian, but since Syrian-owned places are generally located on side streets and not highly visible, several may have escaped possible damage.

According to the United Nations Human Rights Council, Turkey currently hosts about 4 million registered refugees, 3.6 million of which are forcibly displaced people from Syria.

More than half a million Syrians are registered as living in Istanbul, according to the Turkish interior ministry.

Further south, the cities of Gaziantep, Sanliurfa and Hatay have each taken in hundreds of thousands of refugees, corresponding to 21, 21 and 26 percent of their population respectively, according to the interior ministry.

In Kilis, 80 percent of the population consists of Syrian refugees, the ministry says.

With Syria’s conflict showing no signs of ending soon, after eight years of war agitation is growing in some quarters over the refugees’ continuing presence.

Many Turkish citizens are welcoming, however, and some in Istanbul expressed surprise at the sudden violence.

Ramazan Olmez, a Turkish Istanbul resident who works in the construction industry, said: “I’ve lived in this neighbourhood since 1989, and I know the faces of the people who live and work around here.

“That night I saw different faces. Their ages ranged from 16 to 25, youths, who looks like they were being orchestrated by the same source.

“I can say that somebody organised them, took them here and set them against Syrians. They didn’t seem to me to act as a conscious crowd.”

Olmerz said the first rumour he heard that day was that a Syrian man raped a 12-year-old.

“I didn’t believe it. I smelled the provocation,” he told MEE.

“My two tenants are Syrian. I trade with Syrians. They posed no problem against me until this day. That’s why I didn’t believe such an exaggerated allegation.

“Our nation wouldn’t buy such provocations. Our nation is patient and hospitable.”

Olmez is optimistic and believes no racist attack or political game will prevail against a wider Turco-Syrian friendship.

However, he is keen to stress that attention should be paid to the timing of the incidents, right after the Istanbul local election.

“I wouldn’t be surprised if the provocateurs behind the whole attacks turns out to be the supporters of our new mayor, who wants to oust the Syrians with a passion,” he said.

‘This is Turkey. This is Istanbul’

Ekrem Imamoglu, who became the new mayor of Istanbul after a controversial re-run election just nine days ago, says he counts the “Syrian issue” as one of the most urgent problems of the city.

At a news conference for foreign media on Friday, he stated that economic hardships, traffic congestion and the refugee issue were the three major problems of the city.

He said the “refugee problem affects the society from its deepest roots” and he would specifically work on this problem by implementing a three-step roadmap.

‘A refugee must be isolated in a camp if it’s necessary, or he must be re-educated’

Imamoglu said the first phase would be to launch a registry system for women and children in order to better help them.

Arguing that “distributing the Syrian refugees all across the country” was a mistake, the new mayor said the second step was to develop a national policy in order to pursue a more “supervisory policy” towards refugees.

Blaming other countries for remaining silent on the “tragedy” in Syria and its environs, he said: “I am determined in carrying this issue to all over the world, drawing their attention and urging them to cooperate and show solidarity against the human tragedy there, rather than focusing on the oil of Syria.”

Imamoglu said the third and final step was to help the refugees return to their homelands.

The lack of a detailed description as to how to implement the three steps seems to indicate that the refugee issue may stay among Imamoglu’s top three list for a while.

Moreover, in dramatic contrast to his measured statements on Friday, and following the events of the weekend, the new mayor on Monday made a series of controversial remarks on the refugee issue that have drawn widespread condemnation.

Describing the use of Arabic lettering in the city in an interview with Haber Global TV channel, Imamoglu said: “You can not read the signboards in some quarters. This is Turkey, this is Istanbul.”

The mayor’s words worringly chimed with the attacks on Arabic signboards at the weekend, which became the first targets of the vandalism.

Describing the events over the weekend, he said: “Escalations occurred in some quarters. Our citizens are restless, our citizens are on the streets because they couldn’t find a place of safety. They are saying ‘I will find the cure by myself’.

“We will not be an administration which does racist acts. But this situation cannot carry on like this,” he added. “You can not change the demography [of the city] at a stroke. That was a mistake.”

Other statements by Imamoglu included: “A refugee must be isolated in a camp if it’s necessary, or he must be re-educated” and “Some of our people lost their jobs. Employment rates have dropped down because of informally working refugees.”

When challenged by the interviewer that his remarks were dangerous, Imamoglu said he disagreed.

We need to say ‘stop’ at some point

Back at Asik Veysel street, controversy was still raging over the veracity of the rumours that allegedly sparked the weekend violence.

A 61-year-old Turkmen, who came from northern Syria to Istanbul after the war erupted, said being a guest in Turkey was difficult and refugees want to keep on good terms with their hosts as much as possible.

‘If such rumours reflected the slightest part of a truth, we would apologise’

“If such rumours reflected the slightest part of a truth, we would apologise,” the man, who wished to remain anonymous said. Instead, he said a conflicting rumour had spread among Syrians.

“They say a group of local people tried to enter a Syrian wedding ceremony. The wedding guests resisted them and the whole riot began,” he said.

For a 22-year-old Turkish pastry shop worker, who also wished to remain anonymous, the anti-Syrian rumours struck a chord.

“We need to say ‘stop’ at some point. We needed to show a reaction. That is all I can say.”

WHO advises against obligatory ‘vaccine passports’ for travel

African Swine Fever, Which Killed Millions Of Pigs, Is Reemerging In Asia