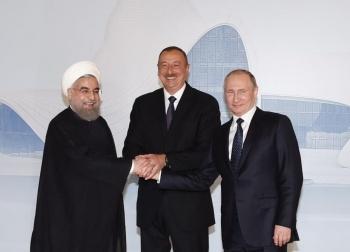 A trilateral meeting of the Russian, Azerbaijani and Iranian presidents are expected to be held on August 14, said Ilyas Umakhanov, Deputy Chairman of the Russian Federation Council, Interfax reported.

“A new format – Russia, Iran and Azerbaijan – has already been developed. I think that the next meeting at the presidential level will be held in Russia on August 14,” Umakhanov said Tuesday at a meeting with Iran’s First Deputy Parliament Speaker Masoud Pezeshkian.