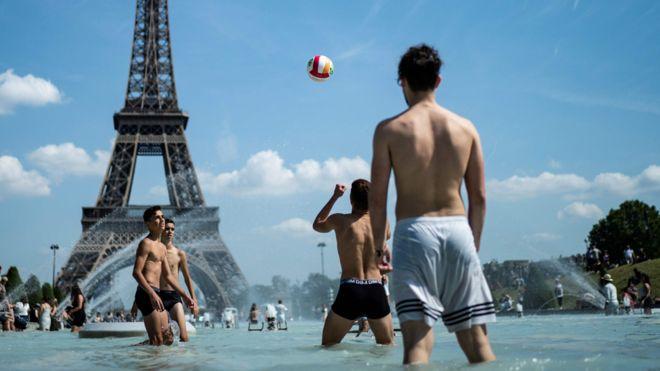 AFP -The record-breaking heatwave that gripped France last week was made at least five times more likely by climate change, scientists said Tuesday as other data showed that last month was the hottest June worldwide in history.

Compared to weather stretching back more than a century, the three-day temperature peak from June 26-28 in France was four degrees Celsius (7.2 degrees Fahrenheit) warmer than an equally rare June heatwave would have been in 1900, the World Weather Attribution (WWA) team told journalists in a briefing.

The heatwave last week smashed national records for the hottest single day as scorching weather spread across Europe from the Sahara. It was so intense that temperatures were as much as 10C higher than normal across France, Germany, northern Spain and Italy, C3S said.

“Models are very good at representing large-scale seasonal changes in temperatures,” she explained.

“On localised scales, climate models tend to underestimate the increase in temperature.”

The findings, presented as a report and to be published in a peer-reviewed journal, focused on metropolitan France and the southern city of Toulouse, where climate statisticians were coincidentally meeting during the heatwave.

Based purely on temperature records, extreme scorchers like the one last week are now 100 times more likely than in 1900, said Geert Jan van Oldenborgh, a senior researcher at the Royal Netherlands Meteorological Institute and co-author of the new report.

“But we are unable to say that this is just because of climate change,” he said.

Air pollution, the “urban heat island” effect, soil moisture, cloud cover and a host of other factors can also affect the intensity of heatwaves.

And models designed to work on a different scale are consistently “biased” such that they underestimate temperature peaks.

“Given what we know about the observation data and the biases of the models, this is our most conservative estimate as to the contribution of climate change,” Otto told AFP.

“The likely role is much higher.”

Merging satellite data with historic temperature charts, the Copernicus team found June 2019 was 3C hotter across Europe than the baseline average between 1850-1900.

“Our data show that the temperatures over the southwestern region of Europe during the last week of June were unusually high,” said Jean-Noel Thepaut, head of C3S.

“Although this was exceptional, we are likely to see more of these events in the future due to climate change.”

France, Italy, Spain and some central European nations all posted all-time temperatures peaks, with dozens of deaths attributed to the week-long heatwave.

A 2003 heatwave in France claimed at least 15,000 lives, according to government figures.

Martha Vogel, a climate researcher at the Swiss Federal Institute of Technology in Zurich who was involved in the WWA research, said it was “virtually certain” that Europe’s heatwave last year could not have occurred without climate change.

Earth has already warmed by 1C since pre-industrial levels. Vogel and the team in a study published last month found that just 2C of warming — levels aimed for in the Paris climate deal — would see a 2018-style heatwave happen every year.