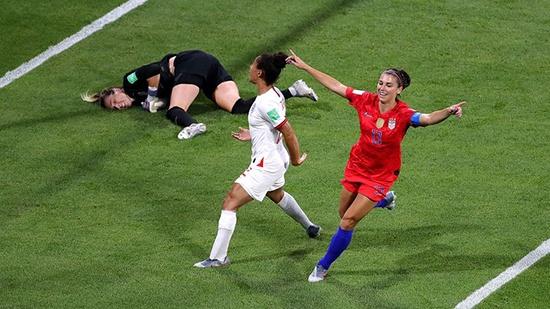 Sporting Life · Columnist
Steph Houghton had an 84th-minute penalty saved as England missed out on a place in the Women’s World Cup final, losing 2-1 to the United States.

Phil Neville’s side headed to Lyon with dreams of becoming the first senior England team – male or female – to contest a World Cup final since 1966.

However, the Lionesses’ third penalty miss of the tournament proved costly.

Alex Morgan then matched White in the race for the Golden Boot with the goal that restored the US advantage in the 31st minute, before the England forward had a second-half effort disallowed on a marginal offside call after VAR was consulted.

England were then the beneficiaries of a second VAR intervention, when White was awarded a penalty after Becky Sauerbrunn made contact with her trailing leg in the box.

However, captain Houghton – on spot-kick duty after Nikita Parris missed England’s last two – produced a poor effort from 12 yards, with Alyssa Naeher making the save low to her right.

The US will now be back at the Groupama Stadium on Sunday to take on the winners of the second semi-final between Holland and Sweden.

England – who had Millie Bright sent off for a second bookable offence before full-time – will face the loser of that match in Nice a day earlier, now hoping to achieve a third-place finish for a second successive World Cup.

USA made a bright start and fired a warning in the fourth minute when Rose Lavelle nutmegged Bright and struck a shot that was parried by Carly Telford, who started in goal due to a minor injury to Karen Bardsley.

US coach Jill Ellis had sprung a surprise with her team selection by leaving Megan Rapinoe – scorer of both goals in the 2-1 quarter-final victory over France – out of the starting XI, but it was replacement Press who opened the scoring.

Kelley O’Hara’s cross from the right wing found Press unmarked at the back post and the forward placed a header beyond Telford, with the delivery having floated over the head of closest defender Lucy Bronze, who will feel she should have done better.

The 10th-minute goal was just reward for the Americans’ dominance of the early exchanges, but England hit back with their first real chance nine minutes later, when Beth Mead’s low delivery teed up White for a side-footed finish.

After Sauerbrunn went close to scoring an own goal, as she attempted to intercept Keira Walsh’s ball into the box, the Americans restored their lead when Lindsey Horan’s chipped cross was headed home by Morgan, who beat Demi Stokes to the ball.

Walsh drew a full-stretch diving save from Naeher with a 25-yard strike after 33 minutes, but England lived dangerously when Telford’s poor attempt to pass to Bright was seized upon by Press, who sent a shot wide from the edge of the box.

Neville’s side then thought they had equalised as Jill Scott flicked Walsh’s pass forward to play White in and she slotted past Naeher, but the effort was ruled out for offside following a VAR check.

Having had that decision go against them, England were then aided by VAR after White, trying to apply the finish to Stokes’ cross, went down in the box under pressure from Sauerbrunn.

Having watched footage of the incident back pitchside, referee Edina Alves Batista deemed White to have been fouled, pointed to the spot and Houghton stepped up.

But the change in taker did not alter the outcome as the captain saw her attempt from 12 yards kept out.

Things then got worse for England as Bright was sent off, being shown a second yellow card following a slide tackle on Morgan.