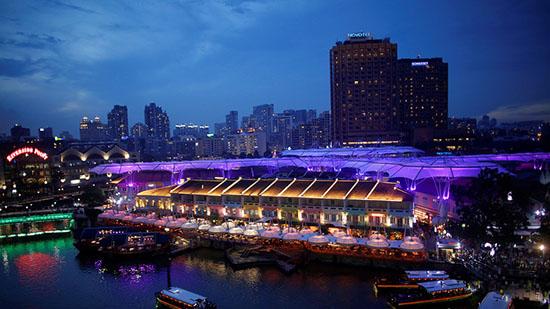 SINGAPORE/KUALA LUMPUR (Reuters) – Malaysia, Singapore’s biggest source for sea sand, has banned the export of the commodity, according to officials in Kuala Lumpur, a move that traders said could complicate the island-state’s ambitious expansion plans on reclaimed land.

Those plans include the development of the Tuas mega port, slated to be the world’s biggest container terminal. Singapore has increased its land area by a quarter since independence in 1965, mostly by using sand to reclaim coastal areas.

The government sources, asking not to be named due to the sensitivity of the matter, said Mahathir was upset that Malaysia’s land was being used to increase the size of its wealthier neighbor. He was also concerned corrupt Malaysian officials were benefiting from the secretive business.

Endie Shazlie Akbar, Mahathir’s press secretary, confirmed that the government had put a stop to sand exports last year. However, he denied that it was aimed at curbing Singapore’s expansion plans, saying it was a move to clamp down on illegal sand smuggling.

The ban was never made public because of the potential diplomatic fallout, the sources said. Singapore has not made any public comment on the ban.

Singapore and Malaysia were part of British-ruled Malaya and became distinct countries in 1965. They often have strained relations due to disputes over territory and shared resources, such as water.

Singapore’s Ministry of National Development, which oversees sand imports, did not directly respond to questions about a ban by Malaysia but said it had multiple sources of sand and was cutting back its use of the commodity.

“Sand is imported on a commercial basis from various countries to ensure resilience in our sand supply,” the ministry said in response to questions from Reuters.

“The government has also been encouraging the industry to reduce the reliance on sand.”

Two traders importing sand to Singapore, who both asked not to be named, said the commodity is becoming scarcer and driving Singapore to source sand from as far as India, which would push up costs. Shipping is the biggest single cost in acquiring sand.

The traders added Singapore has been stockpiling sand in recent years which could provide a buffer against any immediate bottleneck in supplies.

The sand industry is opaque with no international price index, making it difficult to gauge the financial impact of a ban by Malaysia.

Sea sand is mostly used for land reclamation, while river sand is a core component in constructions materials like cement.

Singapore imported 59 million tonnes of sand from Malaysia in 2018, at a cost of $347 million, according to United Nations Comtrade data, which is based on information provided by individual countries’ customs offices.

That accounted for 97% of Singapore’s total sand imports in the year by volume, and 95% of Malaysia’s global sand sales.

The data does not distinguish between types of sand.

Mahathir, who put in place a similar sea sand ban when he was prime minister in the 1990s, has also tightened regulations on river and estuary sand exports, the government sources added.

When Indonesia banned exports to Singapore in 2007, citing environmental concerns, it caused a “sand crisis” in the city-state that saw building activity almost come to a halt. Singapore has since bolstered its stockpiles. [reut.rs/2QRsLPH]

Unsustainable sand dredging disrupts sediment flows and fishing grounds, destroying livelihoods and polluting water sources in some of the poorest communities in Asia.

But Singapore criticized Indonesia for allegedly using the ban as leverage in negotiations over an extradition treaty and border delineation.

Singapore has already reclaimed its continental shelf, which means the depth of sea that is needed to be filled with sand for reclamation has significantly increased, said C.M. Wang, an engineering professor who has advised on Singapore projects.

Also, the pace of Singapore’s expansion is accelerating.

One of the reclamation projects is the Tuas “mega port”, which will open in phases until 2040.

The first of four construction phases at Tuas, due for completion in 2021 at a cost of around $1.8 billion, will use 88 million cubic meters of materials to reclaim an area equivalent to 383 soccer fields, authorities have said.

Singapore has said the Tuas port project, including the reclamation, is progressing on schedule.

“Besides sand, the MPA uses materials from a variety of sources to reclaim the land. These include dredged materials from navigational channels and fairways,” said a spokeswoman for the Maritime and Port Authority of Singapore (MPA).