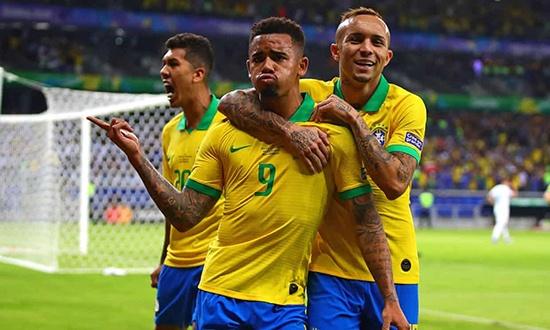 Brazil advanced to the Copa América final with a 2-0 win over their old rivals Argentina in Belo Horizonte on Tuesday thanks to a goal in each half from Gabriel Jesus and Roberto Firmino.

Jesus gave Brazil the lead in the 19th minute when Firmino sent in a low cross for the unmarked striker to side-foot home from close range. The two combined again on the counter-attack after 71 minutes to make it 2-0 after good work from Jesus left Firmino with the simplest of tap-ins.

“We knew that it would be difficult because of the players they have,” said Brazil’s Casemiro. “It’s about details. We knew it would be scrappy and that there would be wind-ups and time wasting. But we have to congratulate our strikers who did a great job. When they got chances, they scored.”

Argentina have not beaten Brazil in a major competitive fixture since 2005 and that run rarely looked like ending in front of 52,000 fans at the Mineirao stadium.

Sergio Agüero hit the bar with a header in the first half and Lionel Messi struck the post 11 minutes into the second period but the visitors had little luck in front of goal and were never on top for any length of time. The result ensures that Messi remains without a major title with Argentina.

Brazil, who have lost only twice in 42 games under coach Tite, will now head to the Maracana stadium in Rio de Janeiro for Sunday’s final against either Peru or reigning champions Chile.

Threshold for passing to the National Assembly reduced for parties, increased for blocs