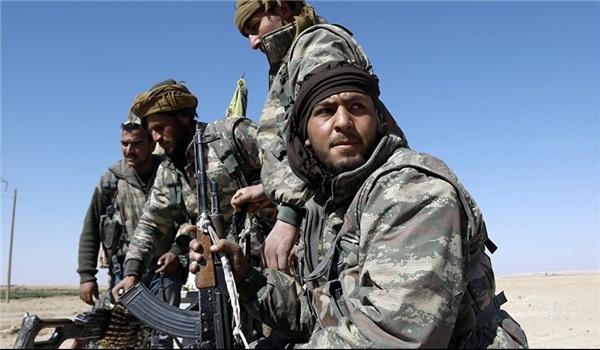 TEHRAN (FNA)- France plans to increase its support for the moves made by Kurdish guerilla to disintegrate Syria after several Western and Arab countries intensified their backing for Kurdish militants, the Arabic-language media outlets said.

The Arabic-language al-Watan newspaper reported that Syria’s Democratic Council affiliated to the Syrian Democratic Forces (SDF) has held workshop in Paris on June 29-30 in line with increasing the provocative measures of France against Syria and in support of the Kurdish guerillas’ separatist goals.

The daily pointed to the presence of the members of the Syrian Democratic Council, including Riyadh Darar who is head of the council, Head of the public relations of Syria’s self-ruled entity Jahad Omar and other representatives of independent currents in the workshop, and said that participants in the workshop discussed issues such as autonomy of the Kurds in Northern and Northeastern Syria.

The Western and Arab states have recently augmented their support for Kurdish separatists in Eastern and Northeastern Syria, resulting in Kurish reluctance in talks with Damascus.

In a relevant development last month, Western officials intensified attempts to speed up the moves underway by the Kurdish guerrilla to decompose Syria through increased visits and helps to the regions occupied by the SDF.

The Arabic-language al-Watan newspaper reported that Australian Envoy John Phillip entered the town of Qamishli in line with attempts to support the Kurds’ separatist moves and held a meeting with Abdulkarim Omer, the head of the Foreign Relations Commission in the Jazeera region, and his deputy Abir Ilia.

It also quoted the Kurdish sources as saying that a delegation of the Kurdish autonomous forces held a meeting with Special Envoy to Syria Geir Pedersen, UAE Minister of State for Foreign Affairs Anwar Gargash, Norwegian Foreign Minister Marie Eriksen and US Envoy to anti-ISIL Coalition Brett McGurk in Oslo on June 18 and 19.

Also, Mazloum Abdi, the SDF spokesman, claimed on Saturday that Damascus should recognize the local autonomous system, including the general department of the Northern and Eastern Syria, as well as the SDF and its full responsibility in the security and military issues in the autonomous regions.

Media reports said earlier this month that American and Saudi diplomatic delegations held a meeting with the SDF commanders and a number of tribal leaders in a Washington-occupied base in Deir Ezzur in a bid to coordinate a plan for the separation of Eastern Euphrates from Syria.

The Arabic-language Step news website affiliated to the militants reported that recently a meeting was held between the two sides in al-Omar oilfield region in Eastern Deir Ezzur.

It added that Deputy Assistant Secretary of State Joel Rayburn, former US Ambassador to Bahrain William V. Roebuck and Thamer al-Sabhan participated in a meeting with Qassan al-Yousef and Leili al-Hassan, the co-chairs of Deir Ezzur civil administration, noting that the event was meant do coordination for supporting the SDF-occupied regions against any possible threat and political and economic support for the SDF in Northern and Northeastern Syria.

According to the report, another meeting was also held between the Arab and US delegations and a number of tribal leaders of Deir Ezzur in al-Omar base to remove differences between the tribes and the SDF and discuss financial and logistical support for the Eastern Euphrates region.

Syria affairs analysts are concerned about the US-Saudi plan to cut off Eastern Euphrates from the mainland, saying that the Saudi minister has paid some money to the tribal leaders to coax them into cooperation with the Kurdish militia and support for Riyadh’s influence in the region.

The US has increased military support for the Kurds in Eastern Syria in recent months.