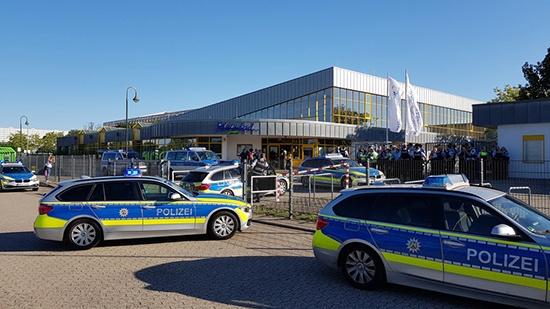 A public pool is surely a nice way to cool yourself off, yet one in Dusseldorf, Germany was not enough to stop several hundred of hot-heads from causing trouble. Over the weekend the pool was closed twice thanks to rowdy visitors.

The Rheinbad public pool was plagued by ugly incidents this weekend, amid a record heat wave in Europe. There was even a large-scale police operation to calm-down rowdy swimmers on Saturday. The explosive situation involved “several hundred” people, primarily young men, the police said.

Local media put the number of the rowdy pool-goers at 400, reporting that the crowd primarily consisted of people of North-African origin.

The young men were harassing over visitors, shouting and splashing into the pool. Two of them ultimately got into fight with one another, running over towels of other pool-goers. The two were confronted by a man, who attended the pool alongside his wife and children. The father – reportedly of Turkish origins – scolded the rowdy bathers, while referring to them as “Nafris.”

The controversial term is a police abbreviation, meaning “North African Intensive Offenders,” and became public knowledge after the 2016 New Year Eve mass sexual assaults in Cologne. It has been condemned by critics as a racial slur.

The rowdy pool goers were among those who took offense, and they confronted the family in large numbers, triggering the police arrival. Several officers were deployed to the scene, yet failed to defuse the situation. The law enforcement was met with angry remarks from the crowd, pelted with empty bottles and other objects. Reinforcements were dispatched to the scene and the police was ultimately able to get the situation under control, escorting the family out of the pool.

Following the incident, the pool’s management decided to shut down the establishment prematurely. Most of the pool-goers vacated the facility peacefully, yet a handful of them were “convinced” by the police to leave and a single, particularly rowdy swimmer was briefly detained.

While the pool reopened on Sunday, it was closed early yet again over more misbehaving pool-goers. Few details on the second incident have emerged, aside from local media reporting it was “similar” in nature to the one on Saturday and involved the same group of rowdy swimmers.