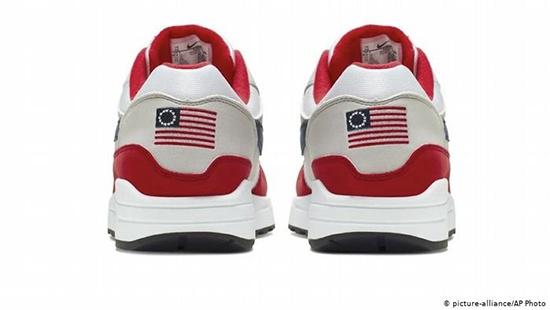 A shoe from the US firm featuring a former version of the American flag has been withdrawn. The banner, known as the “Betsy Ross” flag, has links to a period of slavery, Nike-sponsored athlete Colin Kaepernick said.

US sportswear manufacturer Nike canned the release of a new sneaker on Tuesday which featured a colonial-era version of the American flag.

Nike recalled the shoe, originally planned for a Fourth of July launch, after former NFL quarterback Colin Kaepernick asked the company not to sell a product with a symbol he considered offensive because of its links to an era of slavery.

The ex-US football star was the first NFL athlete to stand up against police brutality toward African-Americans and did so by kneeling during the national anthem.

Nike went on to include him in an advertising campaign last year that included a close-up of his face and the words, “Believe in something. Even if it means sacrificing everything.”

Chris Allieri, founder of New York public relations firm Mulberry & Astor said: “Listening to somebody that has helped the brand in so many countless ways, it makes sense. It would be completely hypocritical for them not to listen to him.”

Nike said in a statement that “it pulled the shoe based on concerns that it could unintentionally offend and detract from the nation’s patriotic holiday.”

“Nike is a company proud of its American heritage and our continuing engagement supporting thousands of American athletes including the US Olympic team and US Soccer teams,” the sportswear firm said.

The decision was not met with widespread approval, though, as Republican Governor of Arizona Doug Ducey tweeted: “Words cannot express my disappointment at this terrible decision. I am embarrassed for Nike.”

As a retaliatory measure Ducey added: “I’ve ordered the Arizona Commerce Authority to withdraw all financial incentive dollars under their discretion that the State was providing for the company to locate here.”

The “Betsy Ross” flag features 13 white stars, each one representing the original colonies. It was used by the pro-Nazi German American Bund in 1939. In addition, the Ku Klux Klan has previously used the flag in an attempt to recruit followers.

The Anti-Defamation League (ADL), however, does not view it as a hate symbol. Mark Pitcavage, a senior research fellow for the ADL’s Center on Extremism, said the banner is mostly used for patriotic purposes. “We view it as essentially an innocuous historical flag,” Pitcavage said. “It’s not a thing in the white supremacist movement.”