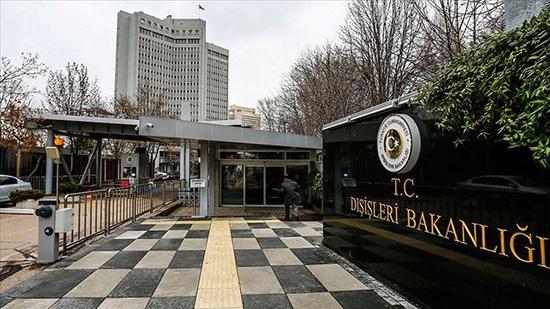 Turkey on July 2 strongly condemned the United Nation’s “Action Plan” with the SDF, an umbrella organization manned mostly by terrorists from the YPG, the Syrian branch of the outlawed PKK.

“It is a calamity for the U.N. that Virginia Gamba, the special representative of the secretary-general for children and armed conflict, signed an ‘Action Plan’ with the PKKterrorist, the commander of the so-called SDF, Ferhat Abdi Shahin, without the knowledge of U.N. members in Geneva,” the Turkish Foreign Ministry said in a written statement.

Gamba met with Shahin over the weekend in Geneva to sign the deal which aims to end the SDF’s use and recruitment of minors.

“We strongly condemn this,” the statement added.

Necessary steps have been taken with the U.N., the ministry conveyed, adding that it is unacceptable for an organization like the U.N., which “needs to be at the front row with the fight against terror, to sign an agreement with a terrorist organization.”

“This is also a clear violation of the U.N.’s own rulings about terrorism,” the statement stressed.

By signing this agreement, the U.N, has confirmed the “gross crimes of the illegal PKK/PYD/YPG, against humanity and international law,” the ministry’s statement stressed.

“It is unacceptable that the U.N. addressed remarks to a bloody-handed terrorist organization to solve the issue,” it said.

The U.N. signed the “Action Plan” with the SDF on July 1.

Gamba said the agreement was being made to ensure “no child is recruited and used by any entity operating under its umbrella.”

Meanwhile, Stephane Dujarric, the U.N. spokesman for the secretary-general, said Gamba’s plan “does not imply any legitimacy, political legitimacy, for any armed group that she engages in.”

Ankara says the YPG, whose members fight in the U.S.-backed SDF, is the Syrian branch of the PKK, which is listed as a terrorist organization by Turkey, the EU and the U.S.