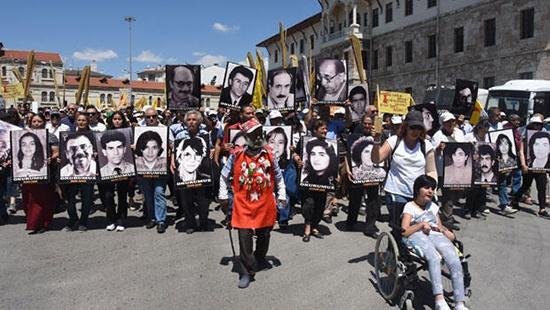 The Sivas Massacre, an arson attack staged by an extremist mob against mostly Aleviguests attending an event at Madımak Hotel that killed 33 intellectuals and two hotel personnel, was commemorated on its 26th anniversary on July 2 in the Central Anatolian province.

Family members, intellectuals and lawmakers laid carnations and photographs in front of the Madımak Hotel, as a small group entered the building which is now a cultural center.

“Our hearts are still broken and we still feel longing [for the victims],” said Hüseyin Güzelgül, the chair of the Alevi Bektaşi Federation, a leading umbrella organization of the Alevi community.

Other speakers, including Pir Sultan Abdal Cultural Association chair Gani Kaplan and AleviUnions in Europe chair Hüseyin Mat, renewed their calls for turning the building into a “museum of shame.”

Kaplan thanked the participants for not leaving them alone for the past 26 years.

An official commemoration event was organized under the coordination of the local governor’s office.