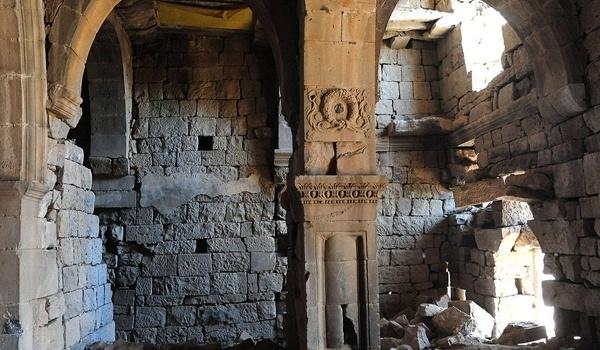 The Kurdish-language Hawar News website quoted local sources in Afrin as saying that the Turkish Army and its allied militants in overnight excavations have plundered the archeological works on the hills of the town of Kamrouk in Mobata region in Afrin in Northwestern Aleppo.

The sources noted that the Turkish Army and its allied militants transfer the stolen artifacts from different regions of Afrin to Turkey.

Meantime, the Ankara-backed terrorists still continue their killings and plundering of civilians’ properties and they also abduct people to blackmail their families.

In a relevant development in April, the Kurdish-language media reported that the Turkish Army had strengthened its military positions in areas under its control in Afrin and set up another military base for Jeish al-Islam terrorists there.

The Kurdish-language Hawar News quoted local sources in Afrin as saying that the Ankara Army is presently setting up 3-meter walls in the surrounding areas of its command centers in the villages of Afrin region, specially in the villages bordering al-Shahba region.

The report pointed to an attempt by the Turkish Army to destroy people’s houses, administrative buildings, schools and water reservoirs North of Jalbareh village in Shirwa, and said that the occupying army intends to set a new military base in the same region.

Meantime, informed sources reported that the Turkish troops are establishing a command center and a camp for Jeish al-Islam terrorists near Kawa al-Haddad Square.

They also said that the Jeish al-Islam terrorists are meant to use the camp for training their militants.