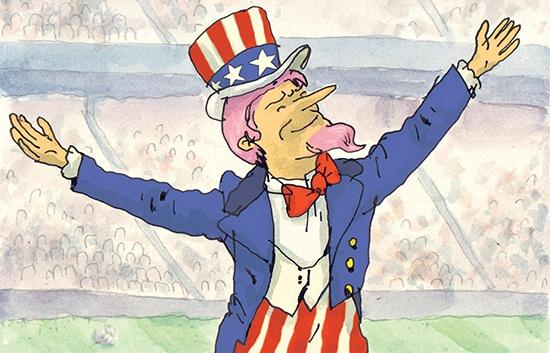 Taking stock of the state of the Republic on Independence Day.

By The Editorial Board –  The New York Times

America in 2019 is a nation that locks up migrant children after separating them from their families. And yet it is also a nation that gives sanctuary and charity to tired, poor people as they seek to join this community, built by immigrants.

It’s a nation that walked out on its commitment to help preserve a livable planet for future generations. And a nation whose engines of ingenuity are working to make the planet healthier and safer.

Its underpaid women’s World Cup soccer team competes wearing the national colors, even as the nation’s symbols and traditions are fiercely contested back home.

The country has always been stronger for its capacity to peacefully manage contradictions, like these, that can seem untenable.

Along the southern border, an archipelago of detainment centers is filled beyond capacity with desperate people seeking a better life or fleeing places so deadly that they risk swimming the Rio Grande with toddlers.

Dolly Lucio Sevier, a pediatrician, treated one girl who she noted was an “underweight, fearful child in no acute distress.” The problem was “severe trauma being suffered from being removed from primary caregiver.”

After the exam, as reported in agonizing detail by The Atlantic, “the child lingered, and Sevier offered to hold her. She climbed into the doctor’s lap and fell asleep in less than a minute.”

Ordered to administer this harsh system, an alarming number of the men and women who patrol the nation’s international frontier, it was learned this week, belonged to a closed Facebook group that guffawed over anti-immigrant, misogynistic and racist filth. While the group discussed throwing burritos at Latino members of Congress visiting the detainment centers, the offline civilian hecklers of Representative Alexandria Ocasio-Cortez and the rest of the delegation instead hurled curses and racial slurs.

Anyone curious about the effects of anti-immigration policies of the Trump administration needs look no further than the sad faces on the pictures of jailed children drawn by jailed children. For the strong of stomach, photos from the government’s own inspectors are even more disturbing.

Yet there are also stories from the border that showcase this country’s virtues.

After reading about the conditions inside detention facilities, Austin Savage and a group of friends walked into a store in Texas. They walked out, having spent hundreds of dollars on diapers, wipes, soaps and toys. When they arrived at a Border Patrol station that was holding children in Clint their donation was refused. While at the station, they also found a bag in the lobby holding soap, toothpaste and a note: “I heard y’all need soap + toothpaste for kids. Maybe more will be on its way soon.”

(There has been such a deluge of donations for detained families that aid groups have asked for financial gifts instead of material goods.)

Last year, the government filed felony charges against Scott Warren, a geography teacher who helped a pair of migrants in the desert who were hungry, dehydrated and with blistered feet.

Last month, jurors refused to return a guilty verdict. (On Tuesday, federal prosecutors said they would drop some charges, but plan to retry him for “harboring illegal aliens.”)

Meanwhile, the democratic mechanism to fix the situation at the border, along with other vexing national problems, is instead grinding its gears.

The Supreme Court last month made democracy of the people, for the people, harder for the people to repair, ruling in a 5-to-4 decision that political gerrymanders — fueled by big data and designed by partisan operatives — are allowable under the Constitution.

Along with the court’s decision, the country’s long-term political and demographic trends forecast continued worsening of the problem of entrenched minority rule.

But even as its decision made the country’s democracy less fair, the court did rise to the demands of justice, and it showed due concern for the rights of the least powerful.

Last month, the court overturned the conviction of Curtis Flowers in the 1996 murders of four people inside a Mississippi furniture store, finding that blacks had been illegally excluded from the juries that eventually convicted him. “Equal justice under law requires a criminal trial free of racial discrimination in the jury selection process,” Justice Brett Kavanaugh wrote for the majority.

The justices also laughed out of court (or as close to it as the law allows) the Trump administration’s specious argument that sticking a citizenship question on the census had nothing to do with intentionally undercounting individuals in immigrant communities.

On Tuesday, the Trump administration said that it would print the census without the question. But President Trump tweeted Wednesday that the effort — whose larger goal is to improve the political fortunes of “Republicans and non-Hispanic whites,” as one architect of the question put it — would continue.

In other courtrooms, justice continues to be meted out, in fits and starts.

Prosecutors in Alabama this week, for instance, announced that they would drop charges against Marshae Jones, whom a grand jury indicted last month on manslaughter charges, after she was shot in the stomach and lost her pregnancy.

It may seem odd that a country so prosperous, so powerful and so free would at the same time be so anxious and angry, so riven by factionalism. It’s even more puzzling — and not unrelated — that this same country, with such resources to draw upon, would nevertheless tolerate such high levels of poverty and homelessness, of addiction to pharmaceutical drugs, of inequality in wealth and application of justice and quality of education.

Versions of these American contradictions have persisted for a very long time, but they seem particularly acute on this national birthday. The question to Americans, as ever, is whether they can summon the spirit to address them. So far, eventually, they’ve found a way.