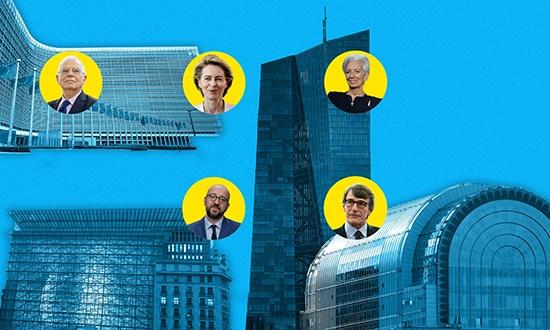 From Ursula von der Leyen at the European commission to Christine Lagarde at the ECB, your guide to key EU jobs

by Daniel Boffey in Brussels – The Guardian

Job spec: Established in the 1957 treaty of Rome, the president of the European commission leads the EU’s executive branch, chairing a cabinet of 28 commissioners known as the college, and setting the bloc’s policy agenda over a five-year term. The commission president designate is nominated by the 28 heads of state and government, but they must be elected by a simple majority in the European parliament to formally take on the role. Von der Leyen will be the 13th commission president, and will be the first woman in the post if parliament supports her in a vote in mid-July.

Job spec: The 2007 Lisbon treaty created the current role of a full-time president, appointed by the leaders, who serves a two-and-a-half-year term, with a one-time possibility of renewal. The president represents the EU on the world stage and chairs summits of the European council, the body on which the 28 leaders sit to give the EU its political direction. The Belgian prime minister, Charles Michel, who is in a caretaker role as negotiations over a new government continue, will be the third such president of the European council. The convention is that the role is filled by former heads of state and government.

The bank’s president is technically “first among equals” on the governing council that sets the eurozone’s interest rates, but every word issued by the incumbent moves the markets. Mario Draghi’s commitment to do “whatever it takes” to save the euro in large part saved the currency.

The role demands specialist knowledge. Although Lagarde is not an economist, her experience as the outgoing managing director of the International Monetary Fund and as a former French finance minister is regarded by the leaders as being sufficient for the role. The post is filled by the European council after consultation with the eurozone group and the parliament.

Job spec: The president acts as the speaker of the house, chairing debates in the plenary and ensuring parliamentary procedures are followed. They also represent the 751-strong chamber to the world. The term is for two and a half years, which can be renewed once. To be elected, a candidate must win an absolute majority of the valid votes cast. Technically, the election of a president is decided by the MEPs, but the heads of state and government, as key members of their political groups, have a heavy say. The new president, Sassoli, is a member of the Socialists and Democrats group, which lost out on the commission presidency.

High representative of the union for foreign affairs and security policy

Job spec: The idea was that the holder of the post would shape and execute the EU’s foreign and security policy and lead the EU’s diplomatic corps, the European External Action Service. The lack of consensus among the member states on policy has undermined the original vision. The leaders appoint the holder of the post by a qualified majority vote, but the president of the commission must agree with the decision. Spain’s foreign minister, Josep Borrell, 72, will be the fourth high representative.