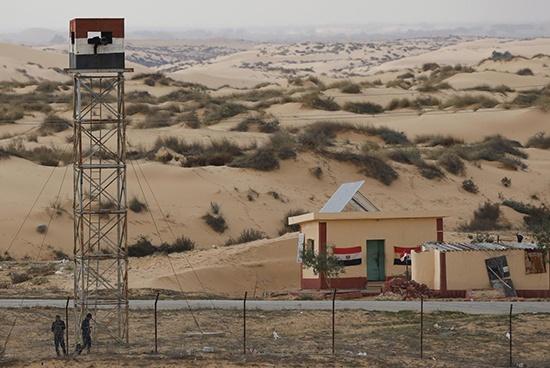 The US president’s plan will make the conflict in Sinai more bloody, more destructive and more protracted.

At US President Donald Trump’s “Peace to Prosperity” workshop in Manama, Bahrain, no Palestinian or Israeli officials were in attendance. The two-day event on what the White House describes as a “vision to empower the Palestinian people” lacked even a political spokesperson for each of the countries involved.

The workshop was but a step in a much wider plan for the region. The term used in the literature is “New Palestine”, and its creation is the end goal of  Trump’s “deal of the century” (DoC).

At the heart of the DoC is the notion that, in order to end the Israel-Palestinian conflict, the so-called two-state solution must be disregarded. The “one-state solution”, which entails both Christian and Muslim Arabs living in one democratic state together with Jews, must also be dismissed.

The thinking runs that it would threaten the characterisation of Israel as the sovereign homeland of the Jewish people, and risk transforming it into an apartheid state.

Sisi is willing to murder, maim and displace Sinai residents with even greater enthusiasm to serve the agenda of others

A “new state solution”, or NSS, has therefore been conceived instead. A “New Palestine”, comprising an enlarged Gaza, a smaller share of the West Bank and some areas on the outskirts of Jerusalem, will become the new and permanent home for the Palestinian people. Its architect, Trump advisor and son-in-law Jared Kushner, this week acknowledged that the Palestinians deserve “self-determination” – but refused to support Palestinian statehood.

What’s unsettling is that the Trump administration itself doubts the workability of the NSS. The Washington Post reports that, during a closed-door meeting with Jewish leaders, Secretary of State Mike Pompeo said “one might argue” that the plan is “unexecutable” and might not “gain traction”.

Nevertheless, those involved will press ahead. Central to the plan, which according to one Palestinian leader “liquidates” the Palestinian cause, is the general-turned-president, Abdel Fattah el-Sisi of Egypt.

Sisi is conspiring to dedicate a swathe of land in the Sinai Peninsula to the settlement of Palestinians. Gaza sources say the strio will stretch from Rafah to El Arish and some parts of northern Sinai, which will remain under Egyptian control.

Several large-scale projects, including an airport, seaport, industrial zone and power stations are purportedly planned. Of course, this will not be sold to the Egyptians as a giveaway. If it were, it would be rejected roundly by the Egyptian people.

Instead, the Sinai Peninsula will be marketed as a “free zone” under Egyptian administration, where Palestinians will be allowed to work, and settle temporarily, providing employment opportunities and the possibility of development for both Egyptians and Palestinians.

But this is a falsehood. And in the shape of the existing occupants of Sinai, Sisi has a problem, one he must solve if he is to fulfil his role in the US administration’s grand plan.

It is a problem he is solving by force.

A report published in May by Human Rights Watch details the human rights abuses in the region committed on an appalling scale. For eight years, the Egyptian military and police have systematically carried out arrests, enforced disappearances, torture, forced evictions and extrajudicial killings.

Air and ground attacks, endorsed by Israel, have taken the lives of scores of civilians, including children. All the while, Sisi has invoked the “counter-terrorism” narrative to excuse and conceal his atrocities. Some of the abuses carried out by government forces and the militants, according to HRW report, could amount to crimes against humanity.

Since the 2013 military coup, Sisi has never failed to remind the world of his contempt for the Egyptian people. Now he is willing to kill, maim and displace those people with even greater enthusiasm to serve the agenda of others. His plan will never be accepted by the Egyptian people.

It will never be accepted by the Palestinians either. Yet he proceeds regardless, and in doing so ensures only that there will be another, major source of instability in a country already marching towards the abyss.

In this swirling vortex of his creation, the crimes that have thus far defined his regime will only increase in number and in severity. More will be stifled, suppressed, suffocated. More will die. Egypt will move ever-closer to the catastrophe of total state failure, the effects of which will shake the region and the wider world.

These negative effects, if not the trampling of the values they purport to hold, should concern the Western powers. The West has turned a blind eye to Sisi’s campaign of violence because it believes his administration serves them in other ways.

As in its dealings with Libya’s General Khalifa Haftar, a man Amnesty International says may be responsible for war crimes, the West has operated on the basis that a “strongman” is the best guarantor of stability.

Yet both Libya and Egypt are descending rapidly into chaos, and the waves of migration that will follow represent an existential threat to a continent already in the throes of surging nationalism.

The Trump administration, the government of Emmanuel Macron, and other Western governments are partners in the crimes against humanity already carried out in Sinai.

They are equally complicit in the repression and cruelty that have characterised Sisi’s six years in power. They now have the chance to condemn and withdraw their support, whether vocally or behind the scenes, for the “deal of the century” – a deal they know will not work, and will make the conflict in Sinai more bloody, more destructive and more protracted.

Amr Darrag
Amr Darrag is the chairman of the Egyptian Institute for Political and Strategic Studies and the former minister of planning and international cooperation in Egypt.