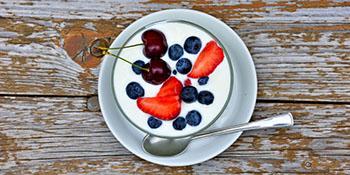 Men who eat at least two servings a week of yogurt may be lowering their risk for colorectal cancer, a recent study suggests.

Researchers examined data on 32,606 male and 55,743 female health professionals who had a colonoscopy between 1986 and 2012. Study participants provided detailed information about their health, lifestyle, eating and exercise habits every four years.

Over that time, there were 5,811 cases of colorectal adenomas, or abnormal tissue that can sometimes become cancerous, in men and 8,116 adenomas in women.

“Our data provide novel evidence for the role of yogurt in the early stage of colorectal cancer development,” said study coauthor Dr. Yin Cao of Washington University School of Medicine in St. Louis.

“The findings, if confirmed by future studies, suggest that yogurt might serve as a widely acceptable modifiable factor, which could complement colorectal cancer screening and reduce risk of adenoma among the unscreened,” Cao said by email.

Yogurt consumption has been linked to a lower risk of colon and rectal cancer in previous studies, and some scientists think this may be because yogurt promotes the growth of healthy bacteria in the gut. But less is known about how yogurt might impact the potential for people to develop adenomas.

To minimize the risk of colorectal cancer, adults should start getting screened for these tumors at age 45, according to the American Cancer Society. Screening can catch tumors sooner, when they’re smaller and easier to treat, increasing survival odds.

Abnormal polyps can take 10 to 15 years to develop into colon cancer, and some adenomas found with screening may never become cancerous or prove fatal.

In the study, yogurt consumption didn’t appear to impact the risk of pre-cancerous polyps in women.

The study wasn’t designed to prove whether or how yogurt consumption might impact cancer risk. It also didn’t examine how many people with polyps went on to develop cancer.

“Much of the benefit from dairy products is thought to come from the calcium they provide, which we know can help prevent colon cancer,” said Dr. Graham Colditz, associate director for prevention and control at the Alvin J. Siteman Cancer Center in Saint Louis who wasn’t involved in the study.

“However, because this study took into account calcium intake, among other dietary factors, these results suggest that yogurt may be lowering risk though an avenue other than calcium,” Colditz said by email.

The probiotics in yogurt may be helping.

“Though it’s not clear that probiotics help lower colon cancer risk, there are a number of possible ways they could,” Colditz said. “Probiotics may help reduce inflammation – a cancer risk factor – as well as bind and neutralize certain carcinogens in the colon.”

People who want to add yogurt to their diet should focus on fat-free or low-fat options, said Vandana Sheth, owner of a Los Angeles based nutrition consulting practice. And they should also pay attention to their overall diet.