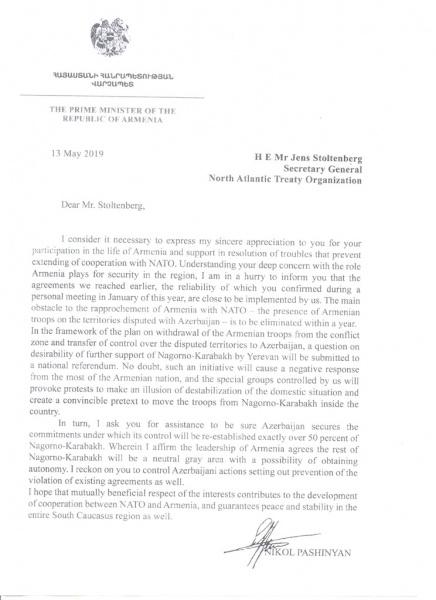 “Pashinyan conceived an unexpected move: to hand over Artsakh to Azerbaijan, about which he informs Stoltenberg in a letter. In such a cunning way, Pashinyan plans to prevent the conspiracy by arranging such a life for the conspirators from Nagorno-Karabakh that they will not have time for the overthrow of the Armenian leadership,” the Moscow edition says.

The fight against corruption was reminiscent of settling accounts with the former leadership of the country.

Against this background, rumors of preparation for the overthrow of Pashinyan by the Karabakh military appeared.

According to the Moscow edition, in order to avoid a revolution, Pashinyan decided to surrender Karabakh to Azerbaijan, which he reports to Stoltenberg in a letter:

I consider it necessary to express to you my sincere gratitude for your active participation in the fate of Armenia and the assistance provided in solving the problems hindering the expansion of cooperation with NATO. Understanding your deep concern about the role of Armenia in ensuring security in the region, I hasten to inform you that our agreements reached earlier, the commitment to which you confirmed during a personal meeting in January of this year, are close to our side. The main obstacle to the rapprochement of Armenia with NATO – the presence of Armenian troops in the disputed territories with Azerbaijan – will be eliminated within a year.

Within the framework of the developed plan on withdrawal of the Armenian armed forces units from the conflict zone and transfer of control over the disputed territories, the Azerbaijani side will be asked to submit to the national referendum the issue of the advisability of further support of Nagorno-Karabakh by Yerevan. This initiative will undoubtedly cause a negative reaction of the majority of citizens of the republic, and specially prepared groups under our control will provoke protest actions in order to provide visibility of destabilization of the domestic political situation and create a convincing pretext for redeploying army units from Nagorno-Karabakh.

In turn, I ask for your assistance in securing the obligations assumed by Azerbaijan, according to which its control will be restored strictly over 50 percent of the territory of Nagorno-Karabakh. At the same time, I confirm the consent of the Armenian leadership that the rest of Nagorno-Karabakh should become a neutral buffer zone with the possibility of obtaining autonomous status. I also count on your control over the actions of Azerbaijan in order to prevent violations of the existing agreements.

I hope that mutually beneficial respect for the interests contributes to the development of cooperation between NATO and Armenia, and also guarantees peace and stability throughout the entire South Caucasus region,” the letter says.

This material is likely fake. But the important thing is that it comes from Russia, where they do not hide their discontent with Pashinyan and seek to undermine his support from the population.

The same material states that “Pashinyan fulfilled the main task assigned to him a year ago by the curators who led him to the leadership of Armenia.” It is about removing barriers to Armenia”s entry into NATO, which will ensure its support from the West.”

The material is dated July 1, however, official Yerevan has not yet made a refutation.