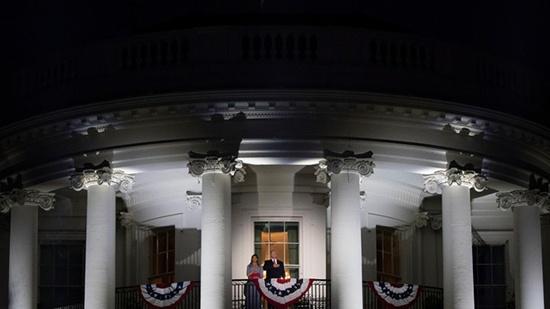 The event is the latest expression of the 45th president’s creeping ubiquity.

If you fear that President Donald Trump has been underexposed lately—if you missed the back-to-back news conferences he gave in Asia over the weekend, or the 45 tweets he’s sent out since his return, or the footage of him speaking with reporters from the Oval Office on Monday afternoon, or the Fox News interview he gave later that night—know that, on the Fourth of July, he will come out of seclusion.

Trump is making himself the centerpiece of what traditionally has been a civic celebration on the National Mall in Washington, D.C., delivering an evening address in front of the Lincoln Memorial. He has wrangled the Pentagon into displaying heavy military hardware for the occasion. Invited guests will watch him from a reserved VIP section stretching from the stage toward the Reflecting Pool, with the White House, the Trump reelection campaign, and the Republican National Committee controlling the tickets.

The event is the latest expression of the 45th president’s creeping ubiquity. A Washington tradition that, for decades, has centered on fireworks and remembrances of the nation’s beginnings is now a camera-ready spectacle that’s decidedly about Trump. Past presidents mostly left the Fourth of July celebration alone. Trump is harnessing it for his own purposes, politicizing patriotic feeling.

Trump prefers “campaign rallies and parades rather than working through traditional parties and local networks,” Sheri Berman, a political-science professor at Barnard College whose research includes democracy, populism, and fascism, told me. “I think July 4 can be seen as part of the way in which … he mobilizes voters and connects with his base, different from the way a more traditional politician would.” Put another way: “Trump has to colonize everything,” says Ruth Ben-Ghiat, a history professor at New York University who specializes in authoritarian leaders. “Any holiday, any civic ritual, becomes a Trump ritual.”

Trump has pined for a national military parade since at least July 2017, when he watched French soldiers marching in Paris on Bastille Day. Speaking privately with French President Emmanuel Macron a couple of months later in New York at a United Nations General Assembly meeting, Trump mentioned the display, turned to his delegation, and said “I want horses! I want horses!” a former French official told me, speaking on the condition of anonymity to discuss the conversation. Planning began shortly thereafter for a parade in the fall of 2018, but the administration ultimately scrapped the idea, citing cost estimates for security, traffic control, and other obligations that ran into the tens of millions of dollars.

The Fourth of July plans seem to resurrect much of what Trump wanted to see. Fighter jets will be streaking overhead. At least two types of tanks, Sherman and Abrams, will be showcased, though they won’t be trundling down Pennsylvania Avenue. (All will be brand-spanking-new, Trump promised. Except … it won’t be. The Sherman tank is old; the World War II–era relic hasn’t been in service since the 1950s.) And Trump appears to have gotten his original wish: Horses will be part of an early-afternoon parade along Constitution Avenue.

Depositing tanks into a crowded city risks some collateral damage. They’re heavy and can crack pavement. An Abrams tank weighs upwards of 60 tons—that’s about 41 Toyota Corollas. Under previous leadership, the Pentagon has been sympathetic to the potential harm. A memo from then–Defense Secretary James Mattis’s office last year cautioned that no tanks should be used for the parade under discussion at that time, and that “consideration must be given to minimize damage to local infrastructure.” Administration officials said the tank displays tomorrow will be “static,” meaning the vehicles won’t be moving.

Watching plans for the event unfold, the city’s leadership is nervous. They worry the infrastructure won’t be able to accommodate the equipment, and they question whether they’ll be repaid for cleanup and other expenses. That’s not an unrealistic fear. The Trump administration and Congress still owe the District of Columbia more than $7 million from Trump’s 2017 inauguration.

“We’re obviously concerned about the political nature of the event,” Muriel Bowser, the Democratic mayor of Washington, D.C., told me. Referencing Trump’s VIP section, Bowser noted that “people from all backgrounds and beliefs come down to watch the fireworks with their families and friends. The addition of a seemingly private event could change the tone of that.”

Trump is unmoved. As always, he has the TV audience foremost in his mind, and the show could be eye-popping. The U.S. Navy’s Blue Angels will perform aerial acrobatics. In addition to fighter jets, the helicopters and blue-and-white 747s reserved for the president’s use will take part in flyovers.

“Our July 4th Salute to America at the Lincoln Memorial is looking to be really big. It will be the show of a lifetime!” Trump tweeted today. The White House has said little about the event. A spokesman referred questions about cost to the National Park Service, which did not respond to a request for comment. In a separate tweet today, Trump said the cost “will be very little compared to what it’s worth.”

In a period of intense political tribalism, it’s potentially perilous for a president to inject himself into what has typically been a nonpartisan exercise. Former President Barack Obama angered Republicans in 2009 when he delivered something as benign as a back-to-school address at a high school in Northern Virginia. A Florida Republican Party official at the time complainedthat Obama’s speech was an attempt to “indoctrinate” children and spread “socialist ideology.” (In the end, his remarks were pretty plain vanilla—not one favorable mention of Norman Thomas or other notable socialists. Obama did warn the kids that there was “no excuse for neglecting your homework.” None.)

But perhaps tribalism is the point. In his remarks, Trump looks poised to wade into more partisan territory. Speaking to reporters yesterday, the presidential counselor Kellyanne Conway said that Trump’s speech will carry a few self-congratulatory notes. He’ll talk about “the success of this administration in opening up so many jobs for individuals, and what we’ve done for veterans,” she said.

Trump has long sought to fuse his nationalist MAGA brand with patriotic signs and symbols that are supposed to hover above party. He literally hugged the flag at a speech to conservative activists in March. Throughout his term, he’s picked fights with NFL players, especially the former quarterback Colin Kaepernick, for kneeling in protest during the national anthem. In that sense, the Fourth of July was, for Trump, ripe for takeover.

There’s a practical element, too: He is using the VIP-seating area to reward loyalists and donors, even if the seats may lack the cachet of, say, a White House visit. “It’s not a state-dinner ticket, which I’d really rather get,” a Trump supporter, who was offered a VIP ticket and spoke on the condition of anonymity, told me.

Yet as much as Trump touts the event as a celebration of the armed forces, some veterans are feeling left out. There are only so many seats in the VIP section, and plenty of campaign supporters who need to be accommodated. One group not getting tickets is the Iraq and Afghanistan Veterans of America, according to the organization’s chief executive officer, Jeremy Butler, who has criticized Trump’s Fourth of July plans. “As far as I know, there’s been zero outreach from the administration to our organization,” says Butler, whose group represents more than 171,000 veterans. A White House official said that “various veteran service organizations” were offered tickets.

Trump’s financial interests stand to benefit from the exhibition he’s created. A review by the watchdog group Citizens for Responsibility and Ethics in Washington (CREW) last month found that Trump’s hotel in D.C., which sits a few blocks from the Mall, figures to do lucrative business this week. The nightly rate on July 5, topping $1,100, is more than double the sum for a normal Friday, CREW said. Comparable luxury hotels in the area are not seeing the same spike in nightly rates. A spokeswoman for the hotel declined to comment.

Whatever Trump says in the shadow of Abraham Lincoln (a man to whom he once paid a rare compliment: “very presidential”), he will have succeeded in putting his stamp on Independence Day ceremonies that his predecessors largely avoided. Republican President George W. Bush liked to invite friends and staff up to the White House’s Truman Balcony to watch fireworks “and generally have excellent fried chicken,” the former Bush aide Karl Rove told me. Obama would hold events for military families and administration aides on the White House’s South Lawn and then watch the fireworks from the roof or the Truman Balcony. That’s how Trump celebrated the holiday last year. Pete Souza, a former official White House photographer who chronicled the celebrations in the Obama era, said in an interview that Trump “is politicizing it. He’s making the Fourth of July about him and not us.”

The last time a president directly took part in the celebration on the Mall was in 1951, when Harry Truman delivered a speech at the Washington Monument on the 175th anniversary of the Declaration of Independence. Trump’s celebration marks the 243rd anniversary—hardly a nice round number that merits special attention.

As Trump’s plans for a celebration gelled, a subplot was whether he could persuade the military to go along with them—a running drama in this administration. Trump appears to view the Pentagon, as he does the Justice Department, as a tool for promoting his own interests. In one recent example, before Trump’s trip to Japan in May, the White House wanted the Navy to move the USS John S. McCain “out of sight” during his visit, lest the boat remind him of the deceased senator he dislikes.

Patrick Shanahan, the former acting defense secretary, warned afterward that the military must not be “politicized.” But with the current power vacuum at the Pentagon, officials coughed up the tanks Trump wanted. “It’s more evidence of the domestication of the military,” Ben-Ghiat says. “They’ve been subordinated to the personality cult of Trump.” On our 243rd birthday, Trump might not want it any other way.