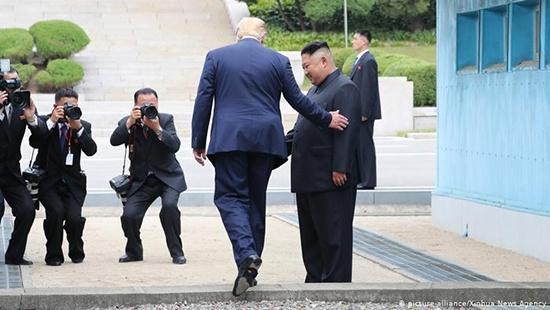 North Korea has accused the US of being “hell-bent on hostile acts”, despite a recent agreement between the two countries to resume nuclear talks.

Pyongyang’s delegation to the United Nations said on Wednesday that the US was “obsessed with sanctions”.

This comes days after the countries’ two leaders held a historic meeting in the heavily fortified demilitarised zone which divides the two Koreas.

And after talks that lasted for almost an hour, the pair agreed to set up teams to resume stalled negotiations on denuclearisation.

But the latest North Korean statement marks a shift in tone and a return to the angry exchanges that have marred relations between the countries in recent times.

North Korea also accused Washington of attempting to “undermine the peaceful atmosphere” on the Korean peninsula.

What did North Korea say?

The North Korean delegation said it was responding to a US allegation that it had breached a cap on refined petroleum imports that was set in 2017.

It also said it was responding to a joint letter sent by the US, France, Germany and the UK to all UN member states that called for further sanctions on North Korea.

“What can’t be overlooked is the fact that this joint letter game was carried out… on the very same day when President Trump proposed [a] summit meeting,” the statement read.

“[It] speaks to the reality that the United States is practically more and more hell-bent [on] hostile acts against the DPRK [North Korea].”

“All UN member states will have to keep vigilance against deliberate attempts by the United States to undermine the peaceful atmosphere that has been created on the Korean Peninsula,” it said.

Pyongyang added that it was “quite ridiculous” for the US to view sanctions as a “panacea for all problems”.

The US is yet to respond to the statement.

How are US-North Korea relations?

Negotiations with North Korea to try to convince it to abandon its controversial nuclear programme reached a peak last year when Mr Trump and North Korean leader Kim Jong-un held a summit in Singapore.

They both committed to the “complete denuclearisation” of the Korean peninsula, but without clarifying what that meant.

It was hoped their second meeting, in Hanoi in February, would make some concrete agreement about North Korea handing over its nuclear programme in exchange for some of the tight sanctions against it being lifted.

But those talks ended with no deal, as they failed to agree on the pace at which sanctions should be eased. Since then the negotiations have stalled, though Mr Kim and Mr Trump have exchanged letters.

At the meeting at the demilitarised zone on Sunday, their exchanges were largely complimentary.

Mr Trump – who once referred to Mr Kim as “little rocket man” – called their friendship “particularly great” and said it was a “great day for the world”.

Understanding The Origins Of Pan-Islamism During World War I – Analysis