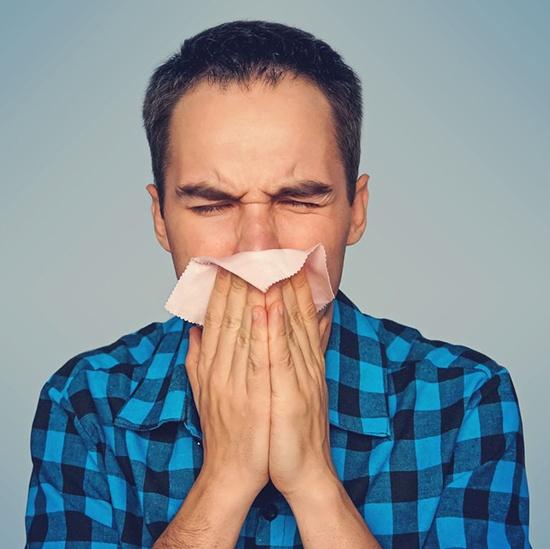 Can’t shake a stuffy feeling in your sinuses, throat, ears or chest? Here’s how to treat catarrh.

Constantly fighting the urge to clear your throat or unblock your nose? If your symptoms include a build up of mucus and a constantly stuffy nose, you might be suffering from catarrh.

Catarrh is an inflammation of mucous membranes in your airways, and typically affects the back of the nose, the throat or the sinuses. It can be extremely frustrating and difficult to shake off, but the good news is it’s not considered to be serious and there are a number of treatment options available.

GP Dr Roger Henderson looks at the causes, symptoms and best treatment options for catarrh, so you can breathe easy:

Doctors usually define catarrh as an excess of thick phlegm or mucus in one of the airways or cavities of the body.

This most commonly occurs in the sinuses at the front of the face either side of the nose, but can also occur in the throat, ears or chest.

Although catarrh is not a condition in itself, it’s often a symptom of other conditions such as a cold, hay fever or other types of allergy-triggered problem, or nasal polyps (fleshy swellings inside the nose).

The swelling also narrows the cavity, resulting in further congestion and this catarrh can be clear and runny or thick and coloured.

Catarrh is caused by the body’s natural defences – the immune system – reacting to an infection or irritation.

For reasons that are unknown, some people have abnormally sensitive blood vessels that react to environmental triggers, such as cigarette smoke and pollution. This causes the affected blood vessels to swell in a similar way to an infection or allergic reaction and it is this swelling leads to congestion and catarrh – it is known as vasomotor rhinitis or non-allergic rhinitis. Cigarette smoke and pollution are common triggers for this, with others including perfume, alcohol, spicy food, changes in the weather and stress.

What are the symptoms of catarrh?

For most people the symptoms of catarrh include the following:

Most catarrh cases require no specific treatment. But if it does not clear up on its own, treatment then depends on the underlying cause. Try the following:

These can help relieve a blocked nose by reducing swelling of the blood vessels in your nose. These are available from pharmacies without a prescription but should not be used for more than a few days before seeking advice as they can occasionally make the congestion worse if used for too long.

Decongestants do not usually cause side-effects and, if they do, they are likely to be mild, but may include irritation to the lining of the nose, nausea and headaches.

Steam inhalation treatment may also help. This involves inhaling steam from a bowl of hot (but not boiling) water and can help to soften and loosen any mucus in the nasal cavities.

Some people find that adding menthol crystals or eucalyptus oil to the water also helps. Steam inhalation is not recommended as a suitable treatment for children due to the risk of scalding.

When should I see my GP?

Most cases of catarrh do not require any medical attention as they usually clear up within a few days once your body fights off the underlying infection.

However, if your catarrh persists over a number of weeks then make an appointment to see your GP, as they may then want to rule out other conditions such as nasal polyps or to find if your catarrh is being caused by an allergy.

They may ask whether your symptoms are worse in particular environments or at certain times of the day or year. This will help them to pinpoint a possible allergen such as pollen.

If you have small nasal polyps (fleshy growths in your nose) it may be possible to shrink them using a nasal spray that contains steroids, but larger polyps may need to be removed with surgery.