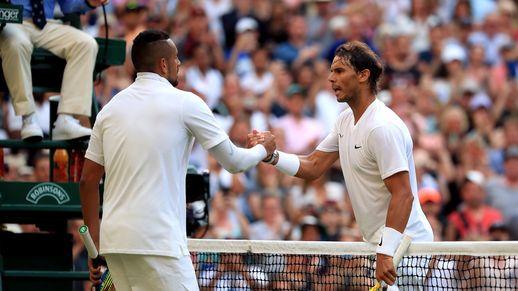 The two have been locked in a war of words over the last few months, with Kyrgios trading insults with Nadal and his uncle Toni, and that threatened to spill out on to Centre Court in the Spaniard’s 6-3 3-6 7-6 (5) 7-6 (3) victory.

There were the customary underarm serves and constant chatter with the umpire, but there was almost a flashpoint in the third set when Kyrgios thrashed a forehand straight at Nadal and opted not to apologise.

The Australian was perplexed by the notion that he should have said sorry, insisting that Nadal has enough money in the bank to be able to take a ball on his body while the Spaniard branded him “dangerous”.

“I don’t care. Why would I apologise? I mean, the dude has got how many slams, how much money in the bank account? I think he can take a ball to the chest. I’m not going to apologise to him at all.

“I was going for him. I wanted to hit him square in the chest. Like, he’s got decent hands.”

That was not the first time that Kyrgios had aimed to hit the ball as hard as he could at Nadal and several flew wildly out of court.

The Spaniard, aiming for a third Wimbledon crown, said: “The history of this sport is about respect and is about playing fair during the whole time.

“I don’t say Nick does this stuff to bother the opponent, but it is true that sometimes he’s dangerous.

“I know he’s a big talented player, but I am a professional player too. I know when you hit this kind of ball, the ball can go anywhere.

“This time the ball went in, almost hit me, no problem. I am professional, so I know how to avoid this. But another one, the ball goes straight to the back. So (it would) have been a dangerous moment for the line umpire.

“That ball hits an eye or something like this, is a problem. That’s it. Is not about that I am angry about him at all. It’s about I want to play a match of tennis. Sometimes it is difficult.”

It was a sub-plot of a thrilling match on Centre Court that had underarm serves, arguments with the umpires and some fabulous tennis.

One of the catalysts of the spat between the two players is Kyrgios’ frustration at Nadal’s speed of play, something that earned him a warning for venting at umpire Damien Dumusois, who he called a “disgrace”.

He later added “terrible” to his description of the official.

“The rule is like play to the speed of the server. Why do I have to wait for him to get into his rhythm every time? I got angry at the ref. He’s like, ‘No, I’ll tell him what I want to tell him’.

“I was like, ‘Oh, a little bit of a power trip there’. He obviously feels pretty important sitting up in the chair. He was just terrible. I thought the way he handled the match was just bad.

“I just don’t think he was up to scratch today. That’s most definitely not why I lost.”

Kyrgios, so often prone to a mental checkout, to his credit stuck to his task and made Nadal work hard, narrowly missing out on a place in the record books when he fired down a 143mph second serve – the second fastest in history.

After all the pre-match hype regarding their feud, Nadal made an early statement by surging into a 3-0 lead.

Much of the beef between the two started in Acapulco in February when Kyrgios produced an underarm serve on his way to a three-set win and it took him only 24 minutes to bring it out of his locker.

It earned a much warmer reception by a thrilled Centre Court crowd, while Nadal afforded himself a chuckle and he was smiling again soon after as he sealed the first set 6-3, serving it out easily.

Kyrgios spent the entirety of Nadal’s toilet break complaining about his slow play, but he channelled that frustration in the best way possible at the start of the second as he found the zone.

He broke to lead 2-0 with an arrowing forehand down the line to end a pulsating rally and then saved two break points, which left him roaring all the way back to his chair.

The 24-year-old even shook off a warning from umpire Damien Dumusois for continued ranting about Nadal’s speed of play, to serve the second set out and level it up.

He is never far from the edge of the cliff, though, and was venting again, this time over Dumusois’ decision to award a point to Nadal after he challenged a second serve which was originally called out.

The spat between the two looked like it might spill out on to court at the business end of the third set as Kyrgios thundered a forehand straight at Nadal and did not apologise when it him him, earning himself a stern glare from his opponent.

Nadal got his revenge by taking the set on a tie-break to move one away from victory.

Kyrgios could have been expected to give up, as he has so often before, but he stuck around, forcing another tie-break in the fourth set.

He will have nightmares about an easy volley he put into the net on the first point, which gave Nadal the impetus and the two-time SW19 winner saw it out for an impressive win that he enjoyed.