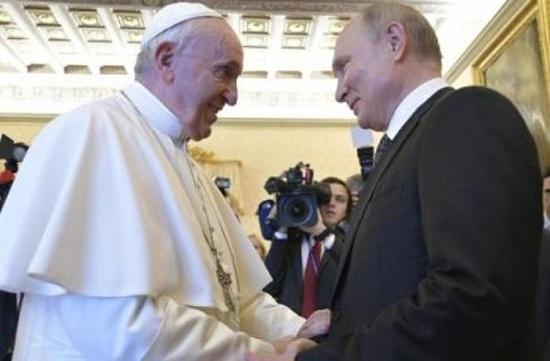 Press release says: “During the cordial discussions, both Parties expressed their satisfaction at the development of bilateral relations, further strengthened by the protocol of understanding signed today regarding the collaboration between the “Bambino Gesù” Paediatric Hospital and the paediatric hospitals of the Russian Federation.”

Vatican City (AsiaNews) – Pope Francis today met in audience with Russian President Vladimir Putin for an hour at the Vatican. Afterwards the Russian leader met with Secretary of State, Card Pietro Parolin, and the Secretary for Relations with States, Mgr Paul Richard Gallagher.

The pontiff and the Russian president discussed Syria, Ukraine and Venezuela as well as other issues relevant to the life of the Catholic Church in Russia. The two also addressed the “ecological question”.

The Holy See Press Office announced the meeting in a statement. “During the cordial discussions,” it read, “both Parties expressed their satisfaction at the development of bilateral relations, further strengthened by the protocol of understanding signed today regarding the collaboration between the “Bambino Gesù” Paediatric Hospital and the paediatric hospitals of the Russian Federation.”

As per tradition, Francis and Putin exchanged gifts. The Holy Father gave the Russian president a medal for the end of the First World War, a copy of the Message for the World Day of Peace of 1st January, the apostolic exhortations Gaudete et Exultate and Christus Vivit, and a copy of the Document on interreligious coexistence of Abu Dhabi. Mr Putin gave the pontiff an icon, a book and the DVD of a film.

The Holy See Press Office did not mention any invitation by Putin to the Pope to visit Russia. None was expected.

In this regard, Mgr Paolo Pezzi, Catholic archbishop of the Mother of God in Moscow, told Vatican Radio that he does not believe Putin plans to invite the pope. The pontiff, he explained, wants such an invitation to be formally made by the government of the country in question. Even more, he wants local religious authorities to show an interest in hosting him.

So far, Russia’s largest religious denomination, the Russian Orthodox Church, has not shown any interest in extending such an invitation.

Today was the third meeting between Putin and Francis. The first took place on 25 November 2013, whilst the second followed lest than two years later, on 10 June 2015.