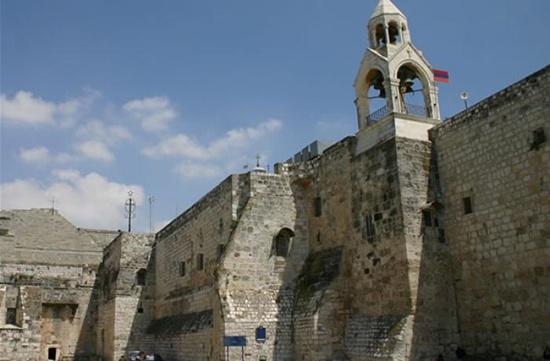 The compound has been a World Heritage site since 2012. An Italian company began the restoration work in September 2013. Thanks to scrupulous restoration work, the mosaics of the transepts shine again.

Bethlehem (AsiaNews/Agencies) – The Church of the Nativity, in Bethlehem (Palestine), is no longer in danger and so was removed from UNESCO’s list of endangered heritage sites, following a decision taken in Baku (Azerbaijan), where the 43rd session of the World Heritage Committee is currently underway.

The restoration work by the Italian Piacenti S.p.a. company began in September 2013 and is still in progress. Church and Palestinian officials have since overseen high-quality work restoring “roof, exterior facades, mosaics and doors,” UNESCO said in a statement.

The Palestinian National Authority, which is in charge of the city, took the decision to start the work, backed by the three religious communities responsible for the sanctuary: the Greek Orthodox Patriarchate of Jerusalem, the Franciscans of the Custody of the Holy Land (on behalf of the Church Catholic Church) and the Armenian Patriarchate of Jerusalem.

Located 10 km south of Jerusalem, the site was identified in the second century as the birthplace of Jesus. The Church of the Nativity was built in 339 AD by Emperor Constantine I and his mother Helena, and is one of the oldest Christian places of worship in the world.

It stands on the remains of a pagan temple built in the period of Hadrian and preserves the cave in which Jesus was born and the manger where he was placed.

The site was widened and restored in the 6th century under Emperor Justinian I, following looting and fires. The surrounding compound which includes three monasteries – Franciscan, Orthodox and Armenian – has been extended, starting in the Crusader period and afterwards.

In 2002 the basilica was besieged by Israeli troops that wanted to flush out some Palestinian militants who had found refuge inside.

Experts have long highlighted the need and urgency to restore the walls and columns blackened by fires and fix the roof, too unsafe for the millions of pilgrims and tourists that visit every year.

Thanks to the impressive work of restoration, the mosaics of the transepts have regained their lustre after centuries. They include Ascension of Jesus, with Mary, the Apostles and Angels; the doubting of St Thomas; Jesus’s entry in Jerusalem; and fragments of the transfiguration scene. The complex is a UNESCO heritage site since 2012.