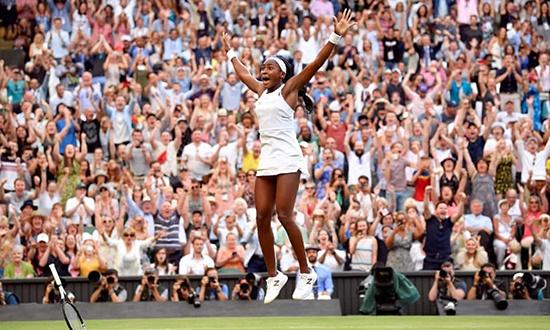 Simon Cambers at Wimbledon – The Guardian

Wimbledon has found itself a new star. Coco Gauff had already shown everyone she could play dazzling tennis, her victory over the five-times champion, Venus Williams, in the opening round signalling her arrival on the world stage.

But last night, the 15-year-old, already the youngest player to ever qualify for the main draw, showed the kind of grit and fight that champions are made of as she came from a set and 5-2 down and saved two match points to beat Polona Hercog of Slovenia 3-6, 7-6, 7-5 for a place in the fourth round.

As Hercog’s final attempted lob sailed long, Gauff leapt up and down several times, arms above her head while her parents, Corey and Candi, went crazy in the stands, the Centre Court crowd joining them in their elation. This was a stunning comeback, the kind of thing most 15-year-olds would not be capable of, especially on the biggest stage of all but Gauff is no ordinary teenager.

How a player deals with adversity is every bit as much an indication of greatness as blistering serves and wickedly-spun backhands. And when her back was to the wall deep in the second set on Centre Court, the teenager showed the kind of resolve that bodes well for the future, both this week and beyond. In her first grand slam event, having won three qualifying matches to even get to the main draw, she is now one of the last 16 standing.

“Right now I’m just relieved that it’s over,” said Gauff, who now plays the former world No 1 Simona Halep in the fourth round on Monday. “She was playing unbelievable. I always knew that I could come back, whatever the score is. I just really went for my shots and I’m just happy that slice down the line went in.”

The slice down the line was a backhand, inside-out slice which found the sideline when Hercog, who had played flawlessly until that point, had her first match point on the American’s serve, at 5-2 in the second set. Hercog challenged it but Hawk-Eye backed up the line call and Gauff went on to hold for 5-3.

Serving for the match, the Slovenian world No 60 hit a big ace to set up a second match point but it was then that the nerves really began to set in and she double-faulted to miss the opportunity. Gauff broke and held to level at 5-5, but it looked like Hercog had regained her poise when she served her way to a 6-5 lead.

But a horrible smash on the opening point of the Gauff service game, a bounce smash from close to the net that somehow she put out, showed all too clearly the tightness she was feeling and Gauff forced a tie-break. Still Hercog had a chance, leading 5-3 but Gauff rallied to take it 9-7, fist pumping and chest-banging in celebration.

What a crazy match. In the first set, Hercog had been utterly dominant. It took Gauff until the second set before she won a single point on her opponent’s first serve while her thunderous forehand was doing the damage and though she missed a break point chance in the third game, she slapped another forehand to break for 4-3 and took the set soon after.

Hercog cut loose at the start of the second set and led 3-0, extending her lead to 5-2 only to tighten up, as the crowd got behind Gauff even more. Usually, it is the youngster who feels the pressure; here it was the 28-year-old, her record of never having been past the third round of a grand slam suddenly making sense.

Having forced the decider, Gauff was made to wait as Hercog took a bathroom break, starting to feel the effects of the long rallies that had become the feature of the match, the pair going slice to slice, Hercog terrified to go for it in case she made a mistake. Gauff was the aggressor and as she began the third set in style, racing to a 4-1 lead.

Hercog had a leg rub-down at 4-1, with ice on both legs, and a good hold of serve gave her hope. Suddenly it was Gauff who was missing, and the pair were level at 4-4. But Gauff simply refused to give in, and she hit two aces to move ahead again at 5-4.

After Hercog held for 5-5, Gauff reasserted her authority with a love hold of serve and the next game turned into a dogfight.

Hercog began with a double-fault but led 30-15 only for Gauff to win the next point with a second smash after the first one had been lobbed back into play. At deuce, the more experienced Hercog missed a forehand to give Gauff match point and unlike her opponent, the 15-year-old took her chance, scrambling back a short ball and then watching as the lob went over her head and long.

As Gauff celebrated, the crowd, who had helped lift her when she was down, joined her. “They say No 1 Court was my court,” she said, having beaten Venus Williams and Magdalena Rybarikova there to make the third round. “Maybe Centre could be my court as well. The crowd was amazing, even when I was down match point. I’m just super thankful that they believe in me.”