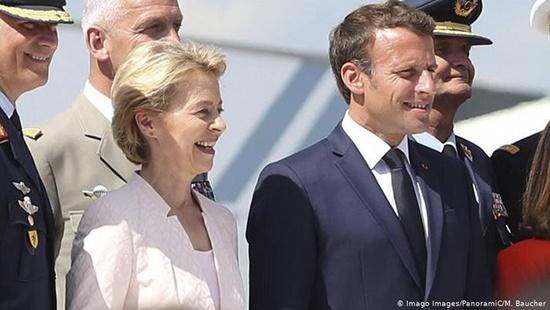 DW-For the first time in 50 years, a German is set to lead the European Commission. But it’s France that will benefit most from Ursula von der Leyen’s appointment, writes journalist and political scientist Jörg Himmelreich.

There’s no doubt that there have been many losers in the backroom political post-trading that goes on for top jobs within the European Union. Often, it’s those kind of deals that shake voter confidence in the the bloc itself.

But if there is one person to emerge victorious from this week’s negotiations over the European Commission presidency, which saw German Defense Minister Ursula von der Leyen nominated for the post, it’s Emmanuel Macron. The French president could not have wished for a better result.

5 reasons why Macron is the winner

First, he prevented Germany’s weakened lead candidate, the conservative Manfred Weber, from getting the job. And for good reason — in doing so, he indirectly staved off Dutch social-democrat Frans Timmermanns at the same time. Despite some verbal niceties from Macron, he and Timmermans are worlds apart, economically speaking. Likewise, Macron had little reason to expect much goodwill from Weber either, especially when it comes to rescuing French banks, debt and economic policy.

Second, Macron has never hidden the fact that, as a supporter of the old political culture of French statism, he is not a great friend of the lead candidate model, whereby each bloc picks a nominee for the Commission president. The idea is to strengthen the role of the European Parliament, at least from the outside, but the system is more of a myth than reality. As long as there are no transnational ballots, only national ones, Weber can only be elected by voters in his Bavarian constituency and not by other EU citizens.

Third, with Christine Lagarde, he has not only succeeded in getting a French woman to head the European Central Bank (ECB), but has also guaranteed himself and the French banks the continued low-interest policy set by outgoing ECB chief Mario Draghi. Lagarde’s election to the ECB executive is a safe bet.

Fourth, von der Leyen is yet to firmly position herself in terms of economic policy, but when it comes to the politically sensitive topic of defense, she has pushed for closer coordination with France. She is a well-known, well-connected face on the world stage. She has “a European DNA,” as Macron said when praising her youth spent in Brussels.

Fifth, the election of the liberal former Belgian Prime Minister Charles Michel as the president of the European Council is yet another win for Macron. The two share a similar desire for greater EU integration. Michel’s party belongs to the same liberal EU party family, Renew Europe, as Macron’s En Marche.

A von der Leyen nomination strengthens Macron’s position in Europe’s sensitive power game, especially within Germany. She will be indebted to the French president, since he paved the way for her in the first place.

German Chancellor Angela Merkel, who had a decisive say in EU policy during the Eurozone debt crisis, had to abstain from voting to nominate a German for the European Commission presidency. She has long been politically close to von der Leyen, and participating in the vote would have further damaged her already-fragile ruling coalition with the center-left Social Democrats (SPD). For the moment, SPD members can only sit back and groan at what’s just unfolded. It’s political theater of the absurd as Germany’s coalition government enters its final act.

Von der Leyen will have to do everything she can to shore up the the EU’s institutional structures, in order to avoid future Franco-German tension, as well as showdowns between other members of the bloc. But no matter how you look at it, Macron has succeeded in filling the EU’s top posts with friendly faces as he continues his quest to see out his European vision. Chapeau, Monsieur President!

Jörg Himmelreich teaches at the European Communication School in Paris.