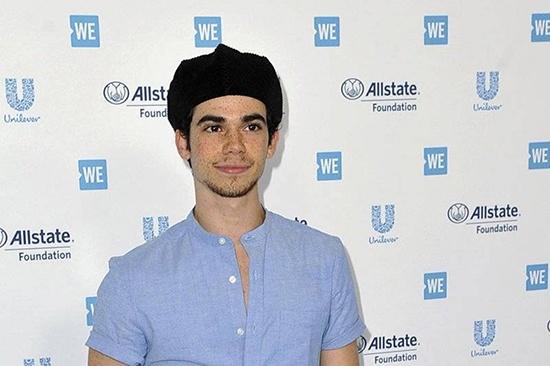 The Cameron Boyce had a seizure in his sleep “which was a result of an ongoing medical condition,” according to a statement from his family.

“It is with a profoundly heavy heart that we report that this morning we lost Cameron,” a spokeswoman for the Boyce family told The Washington Post on Sunday in a statement. “He passed away in his sleep due to a seizure which was a result of an ongoing medical condition for which he was being treated. The world is now undoubtedly without one of its brightest lights, but his spirit will live on through the kindness and compassion of all who knew and loved him.”

“We are utterly heartbroken and ask for privacy during this immensely difficult time as we grieve the loss of our precious son and brother,” the statement concluded.

Boyce was born in Los Angeles and began acting before he was 10 years old, scoring his first recurring role in 2008 on “General Hospital: Night Shift.” He later became a mainstay on the Disney Channel, where he was best known for his roles as Carlos in the “Descendants” fantasy TV film franchise and as Luke Ross in the channel’s family sitcom “Jessie.” He also appeared in the “Grown Ups” film series as the son of Sandler’s character, alongside Kevin James, Chris Rock, David Spade and Salma Hayek.

In 2017, he told Teen Vogue that he had ambitions in other aspects of the arts, such as poetry and photography.

“I think every child actor has that moment where they’re like, ‘OK, I’m not the same person that I was and you guys need to see me as something different,” he told the magazine. “I thought about sort of like, not escaping, but transitioning out of that mold for a long time.”

Born to a Jewish mother and a black father, Boyce was an advocate for on-screen diversity.

“There’s a lot of people in Hollywood who don’t look like me or don’t have similar features like me,” he told Teen Vogue. “When it’s a lead (role), it’s very hard to come by. We sort of are working to change that. That is something that is important to everyone of color, a minority. It’s very important for people (to) not only see in Hollywood and feel represented but also sort of even the playing field a bit.”

Boyce also had a philanthropic streak, using his large social media audience (including more than 10 million Instagram followers) to raise $27,000 in 40 days for the Thirst Project, which brings clean water to undeveloped countries.

Several celebrities posted tributes to the young actor on social media as the news of his death unfolded.

Sandler posted a black-and-white photo of Boyce along with the caption: “Too young. Too sweet. Too funny. Just the nicest, most talented, and most decent kid around. Loved that kid. Cared so much about his family. Cared so much about the world. Thank you, Cameron, for all you gave to us. So much more was on the way. All our hearts are broken. Thinking of your amazing family and sending our deepest condolences.”

“Heartbroken. Lost for words. I had known Cameron Boyce for many years. He was always polite. Always respectful and always a class act. In fact I was going to message him a couple weeks ago to tell him that I wanted to be in each other’s lives more,” he wrote. “Now I wish I had sent that message. Just so he personally knew how highly I thought of him and how much admiration I had for him. My heart goes out to his family & his close friends. Cameron, you were and still are a star. May god bless you in heaven. You will be missed down here.”

Skai Jackson, who played his sister on “Jessie,” posted several photos of herself with Boyce on Instagram. “I don’t even know where to start … I am at a loss for words,” she wrote in the caption. “I never thought in a million years I would be writing this. Cam, you were one of a kind. My heart will be forever broken. I am so happy that I got to spend almost everyday with you on set, you gave the best hugs … Thank you so much for being the big brother I never had … I am so distraught and I cannot stop crying!”

Charles Esten, who played Boyce’s father on “Jessie,” also tweeted about the young actor’s death. “It was a joy to work with him on JESSIE, as it was with all the wonderful young stars of that beloved show. They were as close as actual brothers and sisters to one another, and still are, and my heart breaks for them today.”