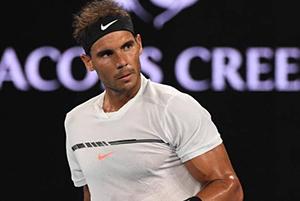 Simon Cambers at Wimbledon –  The Guardian

In the contest within a contest, Novak Djokovic, Roger Federer and Rafael Nadal – that’s in seeding order – seem intent on outdoing each other. The trio, one of whom who will surely be lifting the title come Sunday, dropped only 18 games between them and needed less than five hours to book their places in the quarter-finals at Wimbledon yet again.

Each of them was in imperious form on Monday, conserving energy for the inevitable battles to come. For Federer and Nadal, it is likely to happen in what would be a blockbuster semi-final; for the defending champion, Djokovic, on the other side of the draw, it should happen in the final. Between them, they have 53 grand-slam titles and 14 Wimbledon trophies stashed away. And on this evidence, those numbers will surely rise by one by the end of this week.

Nadal was the first to saunter into the last eight, his 6-2, 6-2, 6-2 win over João Sousa of Portugal every bit as crushing as the scoreline sounds. Seeded three, having been bumped out of the No 2 spot by Federer under Wimbledon’s grass-court seeding formula, Nadal has been playing as well as ever here, and Sousa had no chance. Nadal hit 30 winners and only 10 unforced errors and now plays Sam Querrey, who beat his fellow American Tennys Sandgren 6-4, 6-7 (7), 7-6 (3), 7-6 (5).

Beaten by Djokovic in an epic semi-final last year, Nadal is playing with the confidence of a man who won his 12th French Open last month. He has dropped serve only twice and if he keeps on playing like this, he might be tough to stop as he tries to win here for the third time, but the first since 2010. “Last year I think in the semi-final I played a great match and was very close to winning another title,” he said. “I am happy to be in the quarter-finals, with a lot of positive feelings. I have been playing good matches. Today was another good one. That gives me confidence. I know now starts the most difficult part of the tournament. It’s going to be a big challenge. I hope to be ready for it.”

Djokovic had more trouble with his footing on No 1 Court than he did with Ugo Humbert, the world No 69 who had exceeded expectations to reach the last 16 on his Wimbledon debut. The defending champion, trying to become only the fifth man to win five Wimbledon titles or more in the Open era, was far too solid as he raced to a 6-3, 6-2, 6-3 victory, setting up a meeting with the Belgian David Goffin, who beat Fernando Verdasco of Spain 7-6 (9), 2-6, 6-3, 6-4.

“I always try to set my form so I can play my best at this tournament,” Djokovic said. “Wimbledon has been a special tournament that has motivated me throughout my life. I try not to take things for granted. We keep on going, try to really focus on what needs to be done. I had never played Ugo but saw him play and he’s won against a couple of great players. I was able to study his game, but he probably wasn’t at his best. I’m pleased to execute the job in three sets.”

Federer was the last of the three to advance but the 37-year-old was not to be outshone as he smoked past the No 17 seed, Matteo Berrettini, a man who won a title on grass in Stuttgart last month, 6-1, 6-2, 6-2. Federer took the first set in 17 minutes and the whole thing lasted only one hour and 14 minutes. He will play the No 8 seed, Kei Nishikori of Japan, who beat the unseeded Kazakh Mikhail Kukushkin 6-3, 3-6, 6-3, 6-4.

Federer, who is into the quarter-finals here for the 17th time, said: “I’m very happy. I’ve really gotten into a great groove now. I think today I was able to read his serve a little bit, take control of the baseline, I think it was a great match, great tournament so far.”

Each of the three men has dropped just one set and energy levels should be high heading into the business end of the tournament. The domination continues.