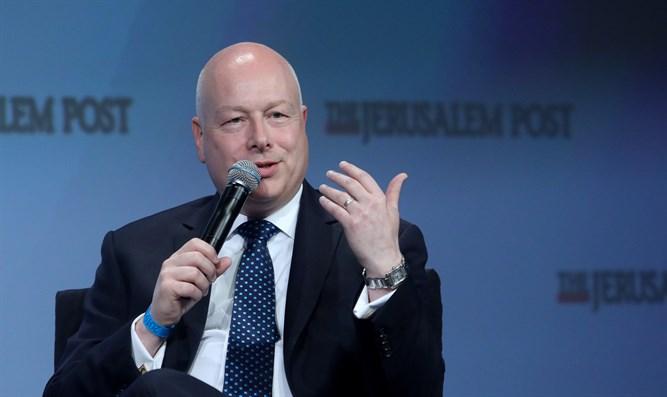 US special envoy: Our plan right now is with Abbas. We cannot make peace unless we are dealing with representatives of all Palestinians.

US special envoy for Mideast peace negotiations Jason Greenblatt said on Monday that the Trump administration is not seeking “regime change” within the Palestinian Authority (PA).

“Our plan right now is with President [Mahmoud] Abbas. We’re not looking for any type of regime change,” Greenblatt told the Christians United for Israel’s (CUFI) annual summit in Washington, DC, according to JNS.

Greenblatt said there is a Palestinian government each in Judea and Samaria, controlled by the Palestinian Authority, and Gaza, which is run by the terrorist group Hamas.

“We have to deal with everybody to make this work,” he added. “We cannot make a comprehensive peace unless we make sure that we are dealing with the representatives of all the Palestinian people.”

Greenblatt did not give a specific timeline regarding when the political component of the administration’s Middle East peace plan will be released.

The US administration released the economic component of the peace plan two weeks ago at an economic workshop in Bahrain which the PA chose to boycott.

White House senior adviser Jared Kushner later criticized the PA leadership for boycotting the Bahrain conference but also pointed out that the US respects Abbas, saying, “I believe in his heart he wants to make peace, and that we can give him an opportunity to try to achieve that.”

In his remarks at CUFI, Greenblatt also blasted the PA for boycotting the economic summit.

At the same time, he added that the dispute between Israelis and Palestinians is a “small conflict in the region” as Iran is the “real threat” to Middle East peace.

“It’s not the Israeli-Palestinian conflict. I know people like to say that that’s the core conflict of the region. That’s a small conflict in the region,” he said, according to JNS. “The real issue is Iran, and every leader there believes that under President Trump we have a chance of potentially solving the Iran issue.”

Finally, Greenblatt criticized the PA for rebuking his attendance at the festive unveiling of, in Jerusalem’s City of David, a section of the ancient road that served as the main thoroughfare between the Shiloah Pool, where pilgrims would ritually purify themselves, and the Second Temple.

“We were accused of Judaizing the city. We will not tolerate that kind of language,” said Greenblatt. “I know that’s been tolerated before. But under President Trump, we will push back. … No matter the criticism leveled against us, we will push back on it time and time again. You cannot possibly build peace without a foundation of truth. And for somebody to suggest that this tunnel is not truth, they need to be corrected.”