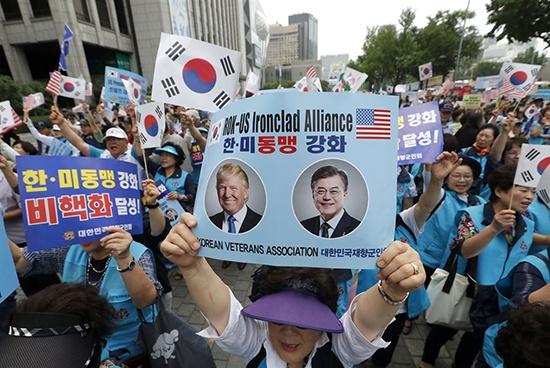 It used to be simple: conservatives in South Korea view the United States far more favorably than liberals, especially when it comes to its unwavering North Korea policy. No longer.

Some liberal opinion leaders, including best-selling author and former health minister Rhyu Si-min, who were once critical of Trump, now praise his “peace efforts” in dealing with North Korea ― a major fault line in South Korean politics. On the other hand, leading conservatives, who generally support a more confrontational approach to the regime, increasingly become uneasy about his “political show.”

Michael Butler, a political science professor at Clark University, said he believes the growing support of South Korean liberals for the Trump approach stems from hopes and expectations for more inter-Korean cooperation, which they have long supported.

“Korean liberals likely appreciate that both leaders (Trump and Kim) have other agendas and motives apart from peace, but view these engagements in any case as providing a window of opportunity for further inter-Korean cooperation,” Butler told The Korea Times.

He noted that, for conservatives, all of this was unsettling because it portended a break from the status quo and established relations, while at the same time seemingly absolving the North Korean regime of its “sins” in one fell swoop.

But still, most conservatives and liberals have maintained their long-held stances on the U.S. and its North Korea policy, trying to understand what Trump’s presidency really means to the future of their country.

Before and during Trump’s visit to Seoul (June 29-30), hundreds of people led by liberal civic groups held rallies against him with banners such as “No Sanctions” and “End Korean War” ― ideas, interestingly, more opposed by some American liberals than Trump himself.

“There does seem to be greater hope out of South Korean liberals regarding Trump-Kim talks, but I think part of that might be a reflection of party politics in Korea and the role of South Korean President Moon Jae-In as a broker between Trump and Kim,” said Timothy Rich, a political science professor at Western Kentucky University.

“My sense is that the liberals seem more optimistic about a possible breakthrough, while conservatives are far more cautious about interactions with Kim.

“Frankly, there should be concern that, because Trump seems to see the world in transactional terms, that he’ll try to conclude a quick deal with Kim that in the short term looks good, but lead to no substantive changes in North Korea’s nuclear program. After all, North Korea has the same capabilities now as they did before Trump’s ‘Rocket Man’ comments in 2017.”

Robert Gulotty, a political science professor at the University of Chicago, noted it is not that uncommon for there to be a mismatch between the domestic ideological commitments of a U.S. president and U.S. allies.

“It reminds me somewhat as the reverse of the odd coupling of Tony Blair, ostensibly a Labor Party leader, and George W. Bush, who was really quite conservative. That the two managed to agree on the invasion of Iraq is quite striking, but it shows that there does not need to be total alignment when it comes to security policy,” Gulotty said.

In the U.S. context, he added, liberals had not turned to an aggressive position toward North Korea, although they may seem to have done so.

“It is confusing, as the liberals’ default position is that U.S. leaders should criticize North Korea’s human rights violations, but not push for regime change,” Gulotty said.

“It is not that U.S. liberals have switched positions; they don’t have consistent opposition to be talking without preconditions, but rather, the liberals do not trust the Trump administration to achieve anything by doing so.”