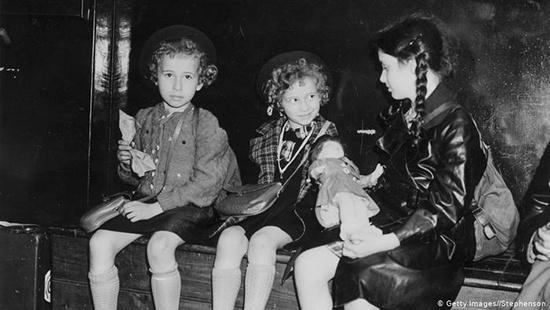 Just months before the outbreak of the Second World War, 10,000 mostly Jewish children were granted refuge in England. Eighty years later, survivors are retracing a painful journey that is still relevant today.

Ralph Mollerick will never forget that cold December day in 1938, when he and his sister boarded a train in Hamburg bound for England with few belongings, but many questions.

“I remember it like yesterday,” he told DW. “The first thing I said to my sister was: ‘Where are our parents?'”

His sister, then 17, tried to calm her little brother’s nerves. Their parents would join the siblings in England in three months, she explained. Then they would all sail to America together to start a new life.

“I always thought about them, that they’ll come,” said Ralph, who was just 8 years old at the time. “But they never did. They couldn’t.”

Ralph was one of 10,000 mostly Jewish children transported from Nazi Germany to England between December 1938 and September 1939, a rescue effort known as the Kindertransport, or “children’s transport.”

To commemorate the 80th anniversary of the rescue, Ralph and a handful of other survivors and their families are retracing the tragic journeys thousands took and confronting a history that’s still relevant today.

After Adolf Hitler took power in 1933, the British government and other Western powers restricted most migration out of Nazi Germany and its occupied territories.

But the mass incarceration of 30,000 Jewish men, the murder of 91 others and the destruction of thousands of synagogues and Jewish businesses on Nov. 9, 1938 — known as Kristallnacht, or the “night of broken glass” — clued in governments to the Nazis’ intentions for Jewish populations, according to Germany’s Federal Agency for Civic Education.

The British government, under pressure from aid organizations and a sympathetic public, promptly lifted visa and passport restrictions on Jewish and other persecuted children under 17 years old.

The government, however, stipulated that private means be used to pay for the trip and accommodations for all new arrivals. Parents were not allowed to join their young children on the journey.

Aid organizations sprang into action, making all the necessary arrangements within three weeks of Kristallnacht, according to the British National Archives.

Trains began rolling into British stations as early as December 1938, though most children like Ralph hadn’t the slightest clue what was in store for them after arrival — or the tragic fate of their parents.

“I got a card from the International Red Cross in 1942 saying that your parents were victims of the Holocaust, we’re very sorry, and we have to tell you that they’re murdered,” he recounted. “That was it.”

Eight decades have passed since the outbreak of the Second World War in Europe in September 1939 halted all Kindertransport efforts.

All that time hasn’t numbed the pain those children and their families still carry to this day, said Melissa Hacker, president of the Kindertransport Association, a New York nonprofit organization that unites Holocaust refugees with their descendants.

But fostering a community of those carrying the same trauma and continuing to educate others about the tragedies of the Holocaust gives that pain a purpose, said Hacker. “We owe it to ourselves and the world to try to make a positive change.”

It’s why Hacker, whose mother was on a Kindertransport from Vienna, felt motivated to arrange a special trip to Europe for the rescue effort’s 80th anniversary. Until July 14, four survivors and over a dozen of their relatives are retracing their journeys to safety — from Vienna to Berlin, Amsterdam and finally London.

For survivors like Ralph, who eventually immigrated to the United States and worked for NASA, taking this journey means difficult memories bubble back to the surface.

But with anti-Semitism in Germany and around Europe once again on the rise, he believes its more important than ever for him to raise awareness and teach others what he’s endured.

“How difficult for a parent to send their children away with the ultimate gift of love — that’s the passion that I carry forward,” he said. “Now it’s my job to teach, to tell our students, what life was like during those times.”

Continued Israeli airstrikes on Syria are testing Moscow’s patience, Jerusalem would do well not to poke the Russian bear

Nicola Sturgeon, and Scottish independence, forges on. The Salmond case is not the Watergate her enemies hoped for