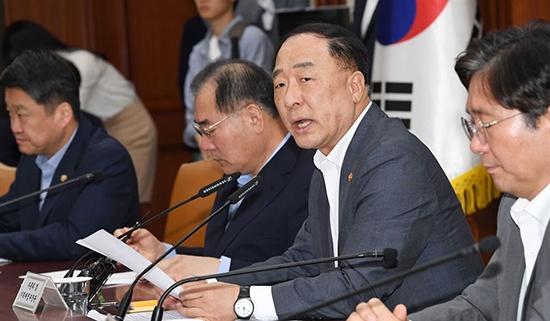 Concern is growing over the effect Japan’s recent imposition of targeted export curbs will have on the Korean economy, with some analysts forecasting they will drag the GDP growth rate below 2 percent.

The impact could be even greater if the restrictions, currently on key source material for semiconductors and displays, are expanded to other sectors, as Tokyo has warned.

Citing the trade conflict between Seoul and Tokyo among other factors, Morgan Stanley’s most recent forecast for Korea’s GDP growth rate for 2019 was 1.8 percent and for 2020, 1.7 percent. The country’s GDP grew by 2.7 percent in 2018.

On July 3, the government lowered its growth forecast for this year to between 2.4 percent and 2.5 percent from its 2.6 percent to 2.7 percent estimate in December, citing slow semiconductor exports and the trade war between China and the U.S. The figure did not reflect Japan’s restrictions on exports that went into effect July 4.

“The excess inventory in the tech sector means that Korea’s exports may not be affected in the near term, as excess inventory of raw materials and finished goods can first be drawn down, but the GDP impact will show up in inventory de-stocking and slower production,” it said.

It noted Japan is a dominant supplier of key materials for semiconductors and flexible displays for Korean companies, providing a respective 43 percent and 93 percent of these. Semiconductors, meanwhile, account for 20 percent of Korea’s exports.

Park Chong-hoon, chief economist at SC First Bank, said “The trade feud will have a negative impact on overall economic sentiment,” referring to the stock market and currency exchange rate.

“It will have an adverse effect on consumption and behavior including corporate investment.”

He noted it will be difficult to achieve the government’s growth forecast for this year.

Sung Tae-yoon, an economist at Yonsei University, said “If the current situation persists, it will have an impact on core industries.”

“We need to come up with a way to resolve the issue, to prevent retaliation and the situation worsening further.”

The Japanese government refused to discuss the issue Tuesday, following a proposal from President Moon Jae-in.

Japan’s measures are seen as a retaliatory move against rulings by Korea’s Supreme Court that ordered Japanese companies to compensate Korean victims forced to work for them under Japan’s 1910-1945 colonial rule. Tokyo contends that the issue was resolved in the 1965 treaty that normalized diplomatic relations.