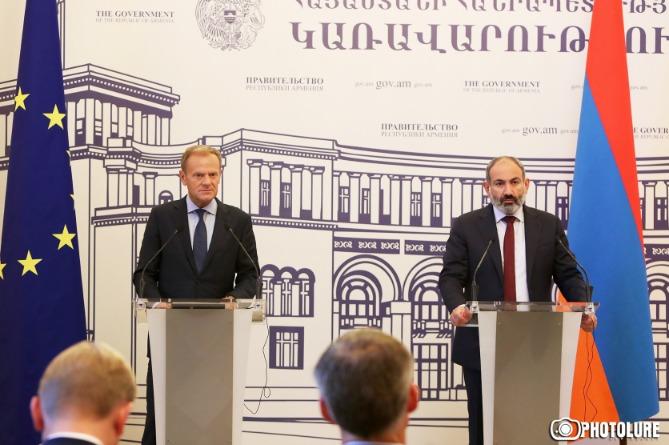 YEREVAN, July 10 /ARKA/. The European Union is ready to help prepare the peoples for peace and calls on the parties to the Nagorno-Karabakh conflict to show restraint, European Council President Donald Tusk said at a joint press briefing with Armenian Prime Minister Nikol Pashinyan in Yerevan today.

He said the EU was encouraged by the dynamics of the negotiations this year and is ready to help in the preparation of peoples for peace and to focus on humanitarian issues. According to him, the EU shares the concern of the OSCE Minsk Group co-chairs over the latest victims on the contact line and statements leading to escalation of tension.

He said both sides should show restraint and take steps to restore the atmosphere that will contribute to peace through real negotiations. He said the conflict has no military solution and a political solution is needed that will comply with the principles of international law.

He stressed that the EU continues to assist the efforts of the OSCE Minsk Group co-chairs and focuses on finding a fair and lasting solution based on the basic principles of the Helsinki Final Act.

“The EU is already supporting peace-building activities and is ready to further support measures to prepare the populations for peace,” said Tusk.

The Nagorno-Karabakh conflict erupted into armed clashes after the collapse of the Soviet Union in the early 1990s as the predominantly Armenian-populated enclave of Azerbaijan sought to secede from Azerbaijan and declared its independence backed by a successful referendum. On May 12, 1994, the Bishkek cease-fire agreement put an end to the military operations.

A truce was brokered by Russia in 1994, although no permanent peace agreement has been signed. Since then, Nagorno-Karabakh and several adjacent regions have been under the control of Armenian forces of Karabakh. Nagorno-Karabakh is the longest-running post-Soviet era conflict and has continued to simmer despite the relative peace of the past two decades, with snipers causing tens of deaths a year.