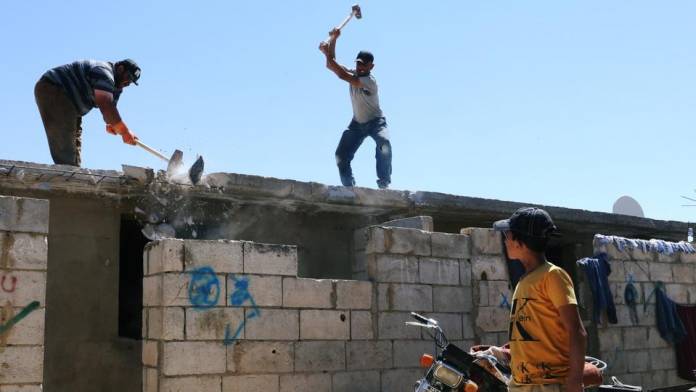 Following a government demand, Syrians have had to demolish more than half of the ‘semi -permanent’ refugee homes they had constructed in what many see as mounting pressure to leave the country

Workers use mauls to dismantle concrete huts at a makeshift Syrian refugee camp in the Lebanese border town of Arsal, Lebanon July 4, 2019. (Reuters)

In April, thousands of Syrian refugees in eastern Lebanon were threatened with the dismantling of their homes by the government. Anything concrete would be at risk of being demolished by July 1, although there were exceptions for temporary structures made of plastic and wood.

Syrian refugees began arriving in Lebanon after the Syrian war broke out in 2011, and have since built what are described as “semi-permanent structures” as homes in several refugee camps in Arsal.

Out of more than 2,700 structures, more than half have already been dismantled by refugees themselves, while others faced the demolition drive led by Lebanese armed forces as the deadline set by authorities expired. On July 1, the army went on a rampage, using bulldozers to knock down at least 20 Syrian refugee homes.

To rub salt in the wounds, the refugees were also asked to clear the rubble– a diktat many of them struggled to reconcile with.

Aid agencies warned of refugees being left stranded and figures estimated that up 15,000 people, including 9,000 children, could be left homeless by the demolitions.

In Lebanon, there are currently around 1.5 million Syrian refugees, of which one million are registered. The Lebanese government justified the decision by emphasising that the structures do not comply with Lebanon’s housing codes despite them being largely unenforced throughout the small country.

The decision is perceived by many as the Lebanese government’s way of discouraging refugees from establishing permanent settlements, and the first step into pressuring or even forcing refugees to return to Syria.

The demolition decision is the latest in a series of actions that have ratcheted up pressure on Syrian refugees, including widespread arrests and forced deportations.

At least 16 Syrians were deported back to Syria, and forced to sign voluntary repatriation forms upon their arrival to Beirut airport, according to a Human Rights Watch report published in May. Thirteen of the refugees stated they lived in fear of persecution and torture. According to the report, an estimated 30 Syrians have been deported since the beginning of 2019.

Why is it controversial?

Refugees who live in camps were not given alternative housing options. Instead, Lebanese officials asked them to replace their homes with wooden planks or plastic tents. Nearly 2,500 to 3,000 units would be directly impacted by the demolitions, which could leave many with no alternative for homes and in search of shelter.

Facing harsh living conditions amid increasing anti-Syrian rhetoric in Lebanon, some refugees are considering returning to Syria, in spite of their fear of persecution and the ongoing fighting in the country.

Human rights organisations warn that their decision to further risk their lives out of exhaustion of options may create the false perception that Syrians are willing to leave for existing circumstances in Syria, where they will be safe. The reality could not be further from the truth.

While some refugees want to settle in Lebanon permanently, many say they want to eventually return to Syria. However, it is yet not possible for many, given that Syrians returning to the country risk hostile persecution, disappearances and arrests. The Syrian regime often perceives citizens who fled the country as traitors, without accepting that constant airstrikes, a lack of jobs and fear of death could have been reasons for migration. Multiple reports suggest that Syrians returning to Syria have disappeared, been arrested or were killed by the Syrian regime.

For refugees in the Arsal refugee camp, being forced home may still be a better option than finding themselves and their families homeless on the streets.