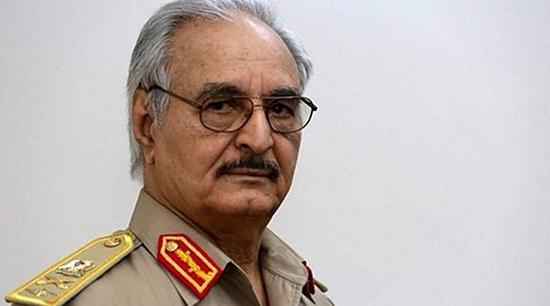 The threat of Islamist groups has apparently bolstered Haftar’s push against the UN recognised Government of National Accord.

It has been more than seven years since Libya descended into a chaos that ensued with the civil uprising of 2011. For many, the downfall of the Gaddafi regime raised hopes that Libya would emerge as a more free and inclusive state than it was during the regime’s rule. However, the Tripoli based Government of National Accord (GNA) led by Fayez-al-Sarraj is struggling to hold Libya together. Serious challenges stymie Libya’s transition to democracy as several militia groups contest for territory and influence that complicate the path towards a lasting political solution.

While the UN-backed GNA and its allied militias have control over some territory in the west, the Libyan National Army(LNA) led by Commander Khalifa Haftar– who once served under Gaddafi, has commanded influence in Libya’s east. There are other smaller groups, including some Islamist groups, that too wield influence in Libya’s major cities and in the country’s south.

At the center of all concerns being faced by Libya, is the resurgence of Islamists who have found the opportunity to operate with impunity in the absence of any central authority that could enforce order. Earlier, the Gaddafi regime had used both coercion as well as co-option tactics to render such groups ineffective. However, GNA’s weakness and in part strong international pressure to act against Islamists have incentivised Haftar to mobilise the militia that today challenge GNA’s legitimacy. Growing concerns owing to the rise of Islamist groups in Libya seems to have taken precedence over other key questions ranging from the fate of the democratic process in Libya to the safety and security of ordinary citizens.

Though political solution to the enduring crisis in Libya is more complex and gradual, the narrative that Islamist groups based in Libya pose a threat to neighbouring countries such as Egypt but also to Europe and beyond seems to have aided Haftar, who has sought to take control of Tripoli and other strategic assets including oilfields in Libya’s south and west. While Egypt fears that political instability and vacuum would provide an opportunity to Islamists to launch attacks in its vulnerable Sinai Peninsula, France faces similar concerns in sub-Saharan Africa- a region of high importance in its Africa policy. Additionally, challenges in the form of mass migration and securing investments in Libya’s energy sector influences the foreign policy choices of European powers like France and Italy.

In the protracted struggle between Haftar led forces and the GNA, several regional and influential powers seem to bestow their confidence on Haftar and his capabilities to fight the Islamist groups. Such concerns have in turn helped Haftar in securing vital support in the form of arms and ammunition, intelligence and training for his forces from Egypt, United Arab Emirates (UAE), and France in his campaign against the GNA. More importantly, support from Egypt, UAE, and France has apparently shielded Haftar from the scrutiny of his actions against Sarraj’s internationally recognised government. Instead, there is little condemnation or deterrence offered against Haftar’s militia forces by important foreign powers.This happens to be the case despite reports that point to human rights abuses by Haftar affiliated militia. Reports also underline that Haftar’s push has been backed by some Salafist factions- a dynamic that is antithetical to the aims of those foreign powers that intend to contain such factions.

The role of foreign powers in shaping Libya’s political dynamic has traditionally been underappreciated. Driven by their respective geopolitical aims, foreign powers were imperative in the downfall of the Gaddafi regime and later in the political negotiations between rival parties. Considering the geo-political rivalry between the Gulf Cooperation Council (GCC) countries such as Saudi Arabia and UAE and other regional powers like Turkey that is expanding its presence in the Middle East and North African (MENA) region further impinges the political stability in several North African states of Arab-Islamic character such as Libya where opposing groups rely on significant foreign support and backing.

Under these circumstances, Libya is transforming into a zone of geo-political contestation between various regional powers. The role of Turkey and Qatar has gained salience as both are ostensibly backing the GNA force against Haftar and his militia. Haftar even went on to threaten Turkey’s presence in Libya. Saudi Arabia, on the other hand, has offered financial assistance to Haftar’s forces. The United States, another influential power, appears to be cautious in politically engaging with either Haftar or the GNA; Russia’s position in Libya too remains ambiguous. Overall, while the preferences of regional powers like the UAE and Turkey are quite clear, the choices of other important powers like France and the US regarding Libya remain opaque. Though their support for the strongman varies in form and magnitude, their interest in seeking a political negotiation between Haftar and the Tripoli government underlines their inability to smoothly choose foreign policy preferences in Libya as opposed to a regional power like Egypt.

Thus far, Libya comes across as a sterling example of a weak state where foreign powers are able to influence/alter its internal dynamics. In doing so, foreign powers have shielded and propped Haftar’s forces that otherwise should have greater accountability for their actions. In Libya’s case, foreign powers also seem to undermine the sovereignty of the GNA by siding with militia forces led by Haftar. However, the threat of Islamist groups that have found ground amidst the political vacuum in Libya seems to overshadow other concerns at the moment.