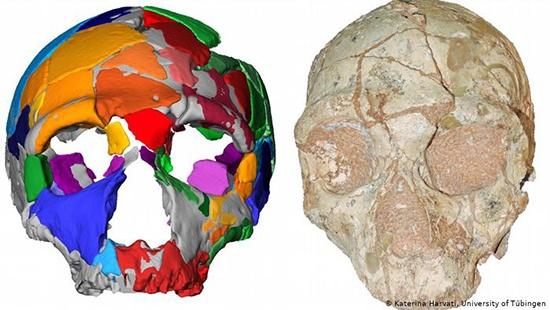 More than 200,000 years old, skull fragments found in Greece show Homo sapiens reached Europe from Africa much earlier than previously known. The findings may upend theories about migration from the cradle of humankind.

Apidima 1 — a Homo sapiens skull fragments found in a Greek cave in the 1970s — was estimated to be 210,000 years old. The research team used state-of-the-art computer modeling and uranium dating to identify the fragments’ age.

Skulls fragments from a Neanderthal — a distant cousin of Homo sapiens — were also found in the cave and named Apidima 2. However, it was found to be 40,000 years younger than the Homo sapiens fragment.

“It shows that the early dispersal of Homo sapiens out of Africa not only occurred earlier, before 200,000 years ago but also reached further geographically, all the way to Europe,” said Katerina Harvati, a paleoanthropologist at the University of Tübingen.

“This is something that we did not suspect before, and which has implications for the population movement of these ancient groups,” she added.

‘Several dispersals’ out of Africa

While some have expressed skepticism at the data, including Warren Sharp at the Berkeley Geochronology Center in California, others have said evidence of earlier migratory paths out of Africa made sense.

“Rather than a single exit of hominins from Africa to populate Eurasia, there must have been several dispersals, some of which did not result in permanent occupations,” said Eric Delson, an anthropologist at City University of New York.