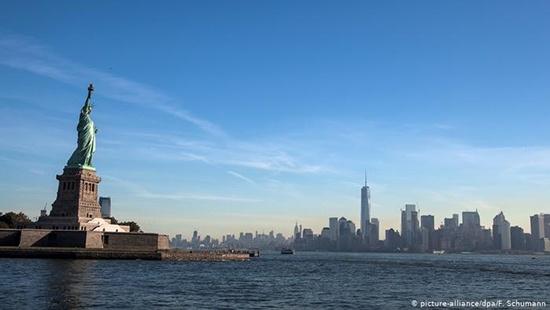 The dispute about one of the questions in the upcoming census reveals an old conflict over the nature of the American nation. The debate is far from over, writes Alexander Görlach.

The upcoming census has caused turmoil in the US since President Trump requested a question be added to the questionnaire about the nationality of those surveyed. At first glance, it seems legitimate. After all, in Germany we also want to know where the people who live here and have residence status come from.

The Trump administration, however, is concerned with something else. The distribution of tax revenues and government grants in the United States is regulated according to population figures. States like New York have a significantly higher number of migrants, both legal and illegal, so it would suit Donald Trump well if less money was transferred to these states in future. That would financially drain those parts of the country that have traditionally voted neither for the Republicans, nor specifically for him, and — more importantly — will vote again next year.

The early days of the US — a federation, not a nation

But this question about citizenship, which was brought to the Supreme Court, goes deeper: The United States has had a chequered history, in which it first had to define itself as a nation and then, determine who belonged to that nation. The 13 British colonies that declared independence in 1776 initially saw themselves not as a nation, but as a federation. Each colony became a state, and together they formed a confederation of states. This explains why, to this day, the states remain skeptical of Washington: The central government represents the concept “nation.” And the federal level of government represents the illegitimate interference into state matters. This became particularly clear when dealing with the question of slavery, which could not be resolved at a federal level because the states had stipulated that they were ultimately responsible for this question.

Today there still exist two vastly different understandings of the American nation. There is one that sees the US as an ethnically homogeneous, Christian, white nation, and another that emphasizes the cosmopolitan nature of American society. Both go back to the early days of the United States. US President Trump glorifies white America, Barack Obama the cosmopolitan. The question of a person’s origin, which Trump wants to ask again now, is therefore only the latest manifestation of a centuries-old dispute about what the US actually wants to be and who should belong there. Up to now the prevailing narrative has been that the US is a sanctuary for the troubled and persecuted of the world. This is also what is written at the base of the Statue of Liberty in New York. By instructing the US Citizen and Immigration Services to remove the addition “a nation of immigrants” from its mission statement, Donald Trump has set about reinvigorating the narrative of a white America.

The current dispute is not about being able to ascertain statistically who lives in the country. It is much more about making the country inaccessible to future generations of immigrants. In this sense, Donald Trump has already attacked the concept of “jus soli,” or “right of the soil,” which is birthright citizenship: Anyone born in the US is automatically a citizen. Donald Trump wants to abolish this, and in doing so, take away from children born to immigrants not only the ability to feel at home in the US, but also to be US Americans. In fact, this has so far distinguished the US from its European partners. In Europe, even the children of third-generation immigrants are asked where they “really” come from, whereas in the US everyone who professes to be American is considered American. This is not possible anywhere in Europe. And this is exactly what has been so appealing and created the pull that made America “great.”

Abolition of the nation

By wanting to abolish citizenship by birth, the president is now setting about abolishing the nation. At the end of this process — and he prefers it this way — America will be a parceled-out patch of land again, in which rather than the rule of law, the law of the jungle, with the strongest ruling the weaker, will apply. With this in mind, in response to the mass shootings in American schools, Donald Trump is also in favor of recommending that everyone carry more weapons, instead of introducing legislative for better gun control.

The US remains divided on this issue, as it has been for two centuries. Future presidential elections, although perhaps not the next in 2020, will show whether this trend is solidifying. It is already apparent that people aged 40 and below incline toward ideas branded as “socialist” by older generations. Eighty-five percent of these younger voters are opposed to the border wall to Mexico, one of Donald Trump’s central campaign promises. The US remains a country of immigration and optimism, at least when it comes to the majority of the younger generation.

Alexander Görlach is a senior research associate at the Institute on Religion and International Studies at the University of Cambridge as well as a senior fellow at the Carnegie Council for Ethics in International Affairs and honorary professor for ethics and theology at the University of Lüneburg. He has also held a number of scholarly and advisory positions at Harvard University. He holds PhDs in comparative religion and linguistics and is a guest columnist for several publications including The New York Times, Swiss daily Neue Zürcher Zeitung and business magazine Wirtschaftswoche.