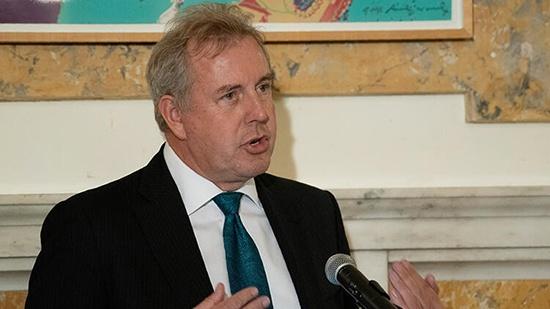 Craig Murray has a strong hunch about why someone would leak Kim Darroch’s scathing comments about Trump.

The media is full of over-complicated theories as to who might have leaked the diplomatic telegrams of Kim Darroch, Britain’s ambassador to the U.S., who resigned Wednesday after his candid views about U.S. President Donald Trump were revealed by the Daily Mail.

I should start by explaining the telegram system of the Foreign and Commonwealth Office, or FCO. The communications are nowadays effectively encrypted emails, though still known as “telegrams,” to the Americans “cables.” They are widely distributed. These Darroch telegrams would be addressed formally to the foreign secretary but have hundreds of other recipients, in the FCO, No.10 Downing Street, other government departments and intelligence services and scores of British embassies abroad. The field of suspects is therefore immense.

It is very important to note that this is an old-fashioned kind of leak which was given to the mainstream media without the documents being published online. It is therefore pretty useless in terms of public information. We haven’t seen the documents, we only know as much as Isabel Oakeshott and the Daily Mail chose to tell us. It is not possible to envision any more untrustworthy or agenda-driven filter than that. We can therefore be certain this was not a WikiLeaks style disclosure in the interests of freedom of information about public servants and their doings, but the agenda was much more specific.

Darroch’s scathing assessment of Trump is no way out of line with the mainstream media narrative and it is interesting – but exactly what I would expect of him – that Darroch shares the neo-con assumption that Trump’s failure to start a war with Iran over the drone take-down was a weird aberration. The leaks neither tell us anything startling nor obviously benefit any political faction in the U.K. So what was the motive?

I believe the most probable answer is much simpler than anything you will find in the vast amount of media guff printed on the subject these past few days by people with no knowledge.

Kim Darroch is a rude and aggressive person, who is not pleasant at all to his subordinates. He rose to prominence within the FCO under New Labour at a time when right wing, pro-Israel foreign policy views and support for the Iraq War were important assets to career progress, as was the adoption of a strange “laddish” culture led from No. 10 by Alastair Campbell, press secretary of former Prime Minister Tony Blair. This culture involved swearing, football shirts and pretending to be working class (Darroch was privately educated). Macho management was suddenly the thing.

At a time when news management was the be all and end all for the Blair administration, Darroch was in charge of the FCO’s media department. I remember being astonished when, down the telephone, he called me “fucking stupid” for disagreeing with him on some minor policy matter. I had simply never come across that kind of aggression in the FCO before. People who worked directly for him had to put up with this kind of thing all the time.

Most senior ambassadors used to have interests like Chinese literature and Shostakovitch. Darroch’s are squash and sailing. He is a bull of a man. In my view, the most likely source of the leaks is a former subordinate taking revenge for years of bullying, or a present one trying to get rid of an unpleasant boss.