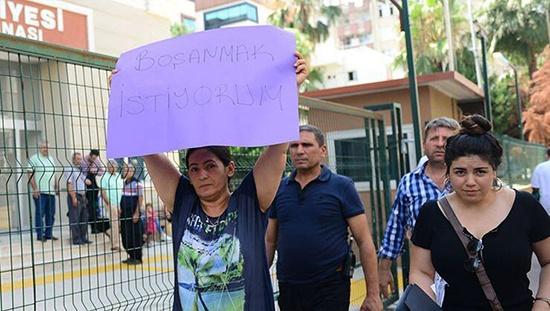 A Turkish woman carrying a placard “I want to divorce” on July 8 initiated a protest outside a courthouse in the southern province of Adana.

The woman, 45 and identified only as Meryem K., told reporters that she had taken such an initiative after authorities did not divorce her despite her application in 2013.

The 7th Adana Family Court has rejected the woman’s demand for divorce, but issued a restraint order for the husband identified only as Cerrah K., 51.

Meryem K. then took her case to an appeals court in the southeastern province of Gaziantep. The Gaziantep Regional Courts of Appeal in 2018 rejected the appeal filed by Meryem K. despite her telling the authorities that she was being exposed to systematic domestic violence for many years.

“Since the complainant could not prove that defendant was at fault and the local court’s determination was in this fact, the appeal has been rejected,” the Gaziantep appeals court said in its ruling.

The courts’ rulings pushed Meryem K. into an individual protest outside the AdanaCourthouse on July 8.

“I have no money left due to court expenses. I want to get divorced, I do not want anything else. I have been exposed to [domestic] violence for 17 years. The judges have not divorced me,” she told reporters outside the courthouse.

“There is a restraint order [against the husband] in valid for the last five years. I am wandering around worried,” she said, adding that she would continue her protest until the authorities divorced her.