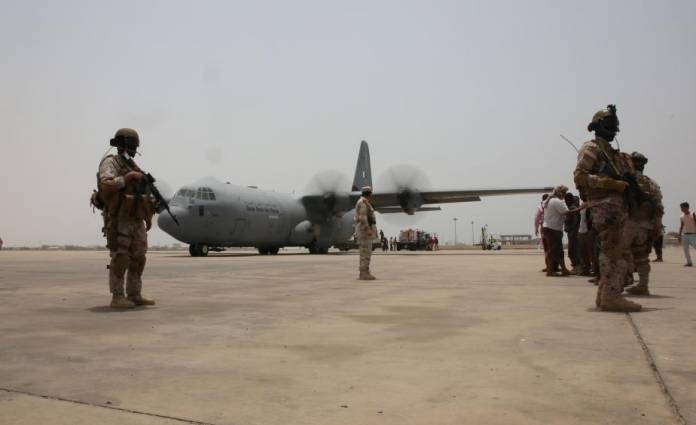 As the United Arab Emirates draws down its troops in Yemen, UAE-backed southern secessionists are massing in the oil-rich province of Shabwah, escalating tensions with fighters loyal to the country’s Saudi-backed President Abd Rabbuh Mansour Hadi, local activists and security officials say.

Formed by the separatist Southern Transitional Council (STC), a group challenging Hadi’s government throughout the country’s southern provinces, a new force that dubs itself “the southern resistance” has recruited thousands of fighters in recent months.

“They started recruitment in April and the build-up is ongoing,” Nasser al-Khalifi, a human rights official who documents abuses by the Saudi- and UAE-led coalition and security forces in Shabwah, said in an interview with an MEE contributor in Yemen.

The push sets the stage for a power struggle in the province with troops loyal to Hadi’s vice president, Ali Mohsen al-Ahmar, a key ally to former president Ali Abdullah Saleh and backer of the Sunni Islamist Islah party, which includes members of Yemen’s Muslim Brotherhood.

As a pillar of the Saleh regime prior to the 2011 popular uprising, al-Ahmar is seen by Yemenis in the southern provinces as a symbol of the northern military occupation that followed the 1994 civil war.

At that time, the Sanaa-based regime crushed a military rebellion in what was then known as South Yemen and enforced a 1990 unity agreement.

Working alongside another UAE-backed militia loyal to the STC known as the Shabwani Elite, the “southern resistance” fighters seek to wrest control of the province from troops loyal to al-Ahmar.

“The Shabwani Elite and the southern resistance are under the instruction of the leadership of the STC,” Shaher al-Sulimani, Lieutanant Commander with the Shabwani Elite in central Shabwah, told MEE in an interview, confirming the build-up of the forces.

The goal, Sulimani said, is “to impose control over our land … [and] to remove it from the grip of the Muslim Brotherhood and supporters of Ali Mohsen [al-Ahmar]”.

The war in Yemen broke out in 2015 when Saudi Arabia and the UAE formed a military alliance to defeat the Iran-aligned Houthi rebels, who had driven Hadi’s government out of the capital Sanaa and subsequently expanded control of large areas of the country.

The coalition was able to quickly capture Aden, the most popular province in the south, but the Houthis have remained in control of Sanaa as the war has since become the world’s worst humanitarian disaster, according to the UN.

While Riyadh and Abu Dhabi say their war efforts aim to restore stability in Yemen, areas under their control have regularly witnessed fighting between rival armed groups – particularly between UAE-backed separatists and fighters loyal to Hadi’s government.

To date, the Emiratis have trained 90,000 Yemeni forces in the war, a senior Emirati official told Reuters.

The uptick in fighting in Shabwah appears to be a prelude to a potential battle between UAE-backed secessionist militias and Islah-affiliated government forces, according to a Yemeni conflict analyst who conducts research on tribal networks in the region.

The analyst spoke to MEE on condition of anonymity because they are not authorised to speak to media.

Peter Salisbury, the International Crisis Group’s senior Yemen analyst, said: “The perception for many in the south is that Islah is almost the greater immediate threat to the independence project, partly because of their position within the internationally recognised government.”

“There’s a sense among some southern factions that the Houthis can be convinced to stay in their area [in the north],” Salisbury said. “There’s not the same sense with Islah.”

‘There’s a sense among some southern factions that the Houthis can be convinced to stay in their area [in the north]. There’s not the same sense with Islah’

Shabwah and neighbouring Hadhramaut to the east were Yemen’s top oil-producing provinces before the war broke out in 2015, and both belonged to what was formerly known as South Yemen, a socialist republic that dissolved and joined the north in 1990.

Still, neither province has benefitted from oil sales since unification. The bulk of those revenues flowed to the central government of Saleh, the former president, and the military commanders he deployed to control the oil fields.

Since Saleh’s removal following Arab Spring-inspired uprisings in 2011, oil profits have enriched his successor, Hadi, and Ahmar’s Islah-affiliated network of tribes and military officers controlling the oil fields, according to the 2019 report by the UN Panel of Experts on Yemen.

STC spokesman Nizar Haitham questioned Hadi and Islah’s willingness to fight the Houthis, accusing them of being more focused on “their economic and political interests”.

“Not only does the political conflict in Shabwah distract from the war against the Houthis, but it also proves to the Arab coalition that Hadi’s government is not a reliable partner regarding the primary aim of the war: a total victory over [the] Houthis,” Haitham told MEE in an interview.

But the UAE’s goals in Yemen may also be shifting away from that fight against the Houthis.

Sulimani, the Shabwani Elite commander, sees capturing Shabwah and Hadhramaut from northern troops as part of that counter-terrorism mission.

Nonetheless, despite its opposition to the Muslim Brotherhood, Riyadh is backing Islah in Yemen as part of its anti-Houthi coalition.

The Gulf kingdom’s rationale here is twofold. First, the party represents one of the few anti-Houthi allies Riyadh has in north Yemen. And second, supporting the group helps ensure that Islah doesn’t forge an alliance with Saudi Arabian nemesis Qatar.

Islah officials claimed to have distanced the party from the Muslim Brotherhood in late 2017 ahead of a confidence-building meeting with Saudi Crown Prince Mohammed Bin Salman and Mohammed bin Zayed al-Nahyan, the crown prince of Abu Dhabi.

Still, the pro-STC forces’ aggressive approach in Shabwah comes at a precarious time for Riyadh and Abu Dhabi.

So far, the Gulf coalition’s focus has been on Yemen’s flashpoint Red Sea port of Hodeidah.

About 20,000 UAE-backed fighters, most of whom are from south Yemen, have been camped there for months awaiting orders on whether to storm the Houthi-controlled city or withdraw from the region as part of a UN-brokered Stockholm plan aimed at averting further bloodshed.

The political opening amid the implementation of the UN deal has reportedly played a role in the UAE’s military drawdown, the unidentified senior Emirati official told Reuters.

If the absence of Emirati commanders on the front lines around Hodeidah leads to a drawdown of its proxy forces there, the fighters may reinforce battlefronts elsewhere across the south, which could include Shabwah and Hadhramaut, said Salisbury.

It also appears that the UAE and Saudi Arabia are seeking to minimise friction between their proxy forces.

‘If the UAE perceives [that] Islah is gaining military strength in Shabwah or Hadhramaut, forces backed by the UAE will try to prevent that from happening’

But the secessionist forces will not easily pass up an opportunity to reclaim southern land from northern troops, and Islah’s troops will not leave the oil-rich region without a fight, according to recent statements by one of Hadi’s top commanders.

At a meeting with UAE-backed forces in May, STC President Aidarous al-Zubaidi called on separatist militia commanders to liberate Shabwah and Hadhramaut.

That threat was rebuffed at the time by Hadi’s top commander at the 1st Military District in Wadi Hadhramaut, Brigadier General Saleh Taimas.

Sadeq al-Muqree, a spokesman for Taimas, told MEE in an interview that any attempts to dislodge his forces from northern Hadhramaut would be “a losing battle before it starts”.

Still, Eleonora Ardemagni, associate research fellow at the Italian Institute for International Political Studies, said she doesn’t expect STC forces to move on Hadhramaut while battlefronts against the Houthis around Hodeidah and in nearby al-Dhale province remain active.

She said a possible lull in the fighting against the Houthis may actually turn Saudi- and Emirati-backed fighters against each other.

“If those battles enter new stalemates, or ceasefires are reached on the local level, the situation could accelerate the violence of opposing agendas and other forces in Hadhramaut,” Ardemagni told MEE in an interview.

“If the UAE perceives [that] Islah is gaining military strength in Shabwah or Hadhramaut, forces backed by the UAE will try to prevent that from happening,” she added.