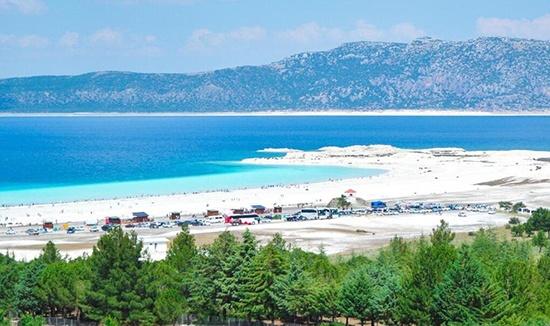 Activists and the General Directorate of State Hydraulic Works (DSİ) are in a disagreement over the fate of an artificial pond established on water resources nourishing the Salda Lake in Turkey’s southern province of Burdur’s Yeşilova district.

The lake has been reputed as “Turkey’s Maldives” for its white beach and clear water.

The DSİ has said that they would not demolish the pond but if necessary would utilize it as a “flood prevention facility.” Activists on the other hand have said that the artificial pond has led to a “visual pollution” in the area, favoring its demolishment.

The issue of the construction of the pond was taken to court in 2017, with judicial authorities then ruling for the suspension of the project as they cancelled the Environment and Urbanization Ministry’s previous ruling that “the environmental impact assessment report is not required.”

But, until the court gave its ruling, the DSİ, without waiting for the judiciary’s decision, started constructing the pond and eventually completed it.

An expert report prepared during the judiciary process said regarding the project that authorities had used sand from the surrounding of the Salda Lake and the artificial pond “would lead to the water level to be diminished in Salda Lake, considering the limited amount of water resources feeding the Salda Lake.”

Following the release of the expert report, the court said that because the area was very important for various bird species and wild animals, it cancelled the previous report, saying that “the environmental impact assessment report is not required.”

And now with the suspension of the project, debate revolves around the fate of the already constructed pond.

DSİ 18th Region director Mahmut Berber said that even though they will abide by the court ruling, the artificial pond would not “in fact lead to the Salda Lake drying up.” “The volume of the pond is 200,000 cubic meters, whereas Salda has a volume of 4 billion cubic meters. We are looking at the process in a scientific way. We have not done anything that is unlawful during the project process,” said Berber.

Activists, however, uphold another opinion. They say the artificial pond currently stands as an “illegal structure.”

“According to the given [court] ruling, the demolishment of the pond is not on the table now. But, with a new application, the DSİ might try to make the pond functioning. And that would damage a natural wonder like Salda Lake,” said lawyer Tuncay Koç, who had filed a lawsuit previously against the construction of the artificial pond on behalf of the environmentalists.

Yeşilova Mayor Mümtaz Şenel has similarly commented on the situation of the already built artificial pond. “I analyzed the pond one week ago closely. There is a visual pollution. The harmony of the Salda Lake has been disturbed. I wish that they [DSİ] would have acted considering the region’s sensitivity, instead of hasting the project against which a lawsuit was filed. And now it is said that ‘Let that the odd [pond] be demolished.’ But, demolishing it is another effort. According to us, this structure is out there due to a justice that came late,” said Şenel.

“We had previously and consistently said that this pond would damage Salda Lake. I am following this lake since 1960. There is a serious water contraction in the lake. If you establish a pond despite this, you will kill Salda,” he said.