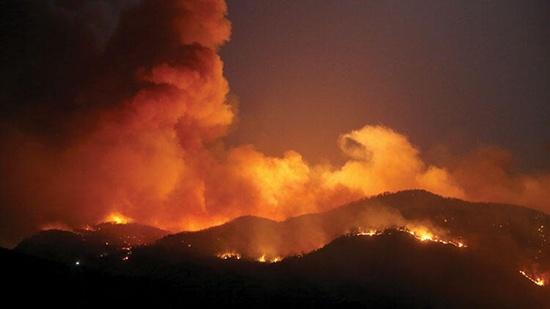 Firefighters have managed to contain a forest fire in Turkey’s southwestern province of Muğla after efforts of nearly 18 hours without any casualty, however, some 350 hectares of forestland burned up and a hotel building was damaged.

The fire broke out in the afternoon on July 10 in Dalaman district for unknown reasons, the Agriculture and Forestry Ministry said in a statement. In a short while, the flames spread to some villages near the resort town of Göcek.

More than 30 houses were evacuated due to risks as the fire became visible from the central parts of the touristic Fethiye district, which was 60 kilometers away from the focal point of the blaze, according to the statement.

A total of 520 firefighters, 105 water tankers, 18 bulldozers and 15 helicopters battled the flames.

Agriculture and Forestry Minister Bekir Pakdemirli, who was on an official visit to Russia on July 10, said firefighters had gotten the blaze under control in the early hours of July 11.

“People started returning to the evacuated neighborhoods,” he said at the provincial directorate of forestry in Muğla.

There were no casualties or property losses, he added, saying that only an unoccupied boutique hotel suffered minor damage.

Increase in number of fires

He also said that the reason behind the spread of the fire at such a fast pace was the weather conditions, pointing to the temperature of 37 degrees Celsius, wind speed of 40 kilometers per hour and humidity rate of 17 percent.

“The biggest fire Turkey has ever seen damaged an area of 17,000 hectares. Although this one was not a big fire in that sense, it was the threats posed to the residential areas that made us hot and bothered,” said Pakdemirli.

Turkey has seen 730 forest fires this year so far, with an increase of 45 compared with the same time period of 2018, he said.

“The total of the affected area [from fires] in 2018 was 1,525 hectares, whereas it is only 828 hectares in 2019. Last year an area of 2 hectares was affected in a fire on average and now the average of affected area is less than one hectare,” he added.

The General Directorate of Forestry have been working on reducing the average time of first respond to a fire from 13 minutes to under 10 minutes, according to the minister.