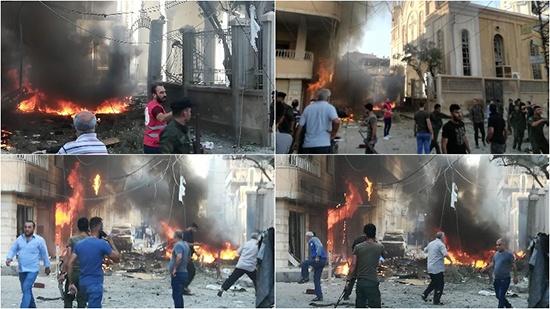 ERBIL (Kurdistan 24) – A car bomb on Thursday detonated in front of a church that is situated in a regime-held neighborhood in the northeastern Kurdish majority Syrian city of Qamishli (Qamishlo), near the Turkish border.

The explosion injured twelve people, according to local media ANHA, which reported that they are currently in stable condition and receiving treatment at a medical facility.

Video released by the news agency showed a chaotic scene of the aftermath, with crowds gathering to watch flames rising from the entranceways of two buildings.

Virgin Lady Church is close to central Qamishlo, part of a strip of land controlled by Damascus that halves the city, along with territory on its southwest outskirts. The rest is controlled by the US-backed and Kurdish-led Syrian Democratic Forces (SDF).

No group has yet claimed responsibility for the attack.

In mid-June, an explosion targeted the main headquarters of the Internal Security Forces in Qamishlo near the city central roundabout, known as Sony, injuring two.

Security forces and ambulances rushed to the scene, from where smoke could be seen rising, where severe damage to surrounding buildings could be seen.

On July 27, 2016, a truck bomb blast in Qamishlo claimed by the Islamic State took the lives of nearly 50 people and wounded about 150 others.

In recent history, Qamishlo is best known as the site of a 2004 event that first ignited an uprising in northeastern Syria that rapidly spread across other Kurdish-majority areas. At the time, it was arguably one of the most formative events of Syrian Kurdish political awareness in two decades.

The incident that sparked the uprising began during a seemingly uneventful football match between two rivals: Fetuwa, mainly supported by Arabs, and al-Jihad, supported by Kurds.