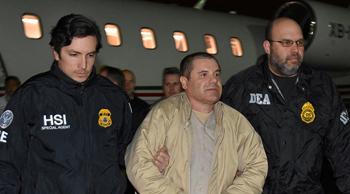 Joaquin Guzman faces a mandatory minimum of life in prison at his scheduled sentencing hearing next Wednesday, following his February conviction on a variety of drug charges

US prosecutors said they want the Mexican drug lord Joaquin “El Chapo” Guzman to spend the rest of his life – plus 30 years – in prison, after he hears from a victim who survived one of his murder plots.

Guzman, 62, faces a mandatory minimum of life in prison at his scheduled sentencing hearing next Wednesday, following his February conviction on a variety of drug charges.

In a Wednesday night letter, prosecutors asked U.S. District Judge Brian Cogan in Brooklyn to add another 30 years because jurors convicted Guzman of illegally using a firearm, including a machine gun, in connection with drug trafficking.

Prosecutors also said Guzman conspired to murder “numerous” people as a leader of the Sinaloa Cartel over a quarter century, and at least one target intends to make a “victim-impact statement” at the sentencing hearing.

“The overwhelming evidence at trial showed that the defendant was a ruthless and bloodthirsty leader of the Sinaloa Cartel,” prosecutors said. “A life sentence is just punishment for this defendant.”

Prosecutors also want Guzman to forfeit $12.7 billion, based on the value of drugs he trafficked. They said Cogan can set any restitution within 90 days after the sentencing hearing.

“This is a mandatory life sentence, and there is nothing in the government’s memo that changes that,” Guzman’s lawyer Jeffrey Lichtman said in an interview. “As to the restitution, it is pure fiction. The government has yet to locate a single penny of his assets.”

Prosecutors said Guzman amassed power in Mexico through murders and wars with rival cartels while trafficking tons of cocaine, heroin, marijuana and methamphetamine into the United States.

Guzman spent much of his career on the run, twice escaping from maximum-security Mexican prisons, before being caught in January 2016 and extradited to the United States a year later.

His trial lasted 11 weeks, and included testimony from more than 50 prosecution witnesses.

On July 3, Cogan rejected Guzman’s bid for a new trial, which came after Vice News published an interview with a juror who said several jurors ignored Cogan’s instructions not to read about or discuss the case during the trial.