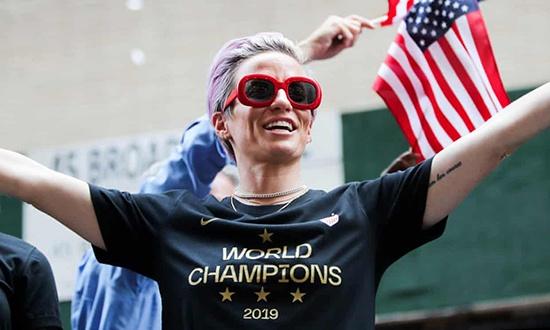 New York City police are investigating a possible hate crime directed at Megan Rapinoe after posters of the World Cup champion were defaced with homophobic slurs.

The defaced posters, which were at a Manhattan subway station, were reported early on Monday morning. The US had won the Women’s World Cup final on Sunday, and were given a victory parade in New York on Wednesday. Rapinoe, who is gay, finished as the top scorer in the tournament and is a vocal advocate for women’s and LGBT rights. She has also clashed with Donald Trump. Before the World Cup she said she would not visit the White House if the US won the tournament, and on Sunday she accused the president of excluding large sections of the US population.

After the parade on Wednesday, Rapinoe preached a message of unity. “This is my charge to everyone: we have to be better,” she said. “We have to love more. Hate less. We got to listen more and talk less … It’s our responsibility to make the world a better place.

A spokesperson for New York’s Metropolitan Transport Authority said they had referred the defaced posters to police. “Hate has no place in the transit system and we work hard to make the subway a welcoming, safe environment for everyone,” said in a statement. “We referred this to NYPD which responded to investigate, our maintenance teams got the posters cleaned and we will have them replaced with new ones if necessary.”

The US team have been widely praised since winning their second World Cup in succession. After Wednesday’s parade they were named team of the year at the prestigious ESPY awards. However, there has been some backlash to Rapinoe and her teammates’ activism. On Wednesday, former Trump advisor Sebastian Gorka accused the team of attacking American values. “They’ve gone insane, and they want to destroy everything that is wholesome in our country and in our Judeo-Christian civilization,” he said.